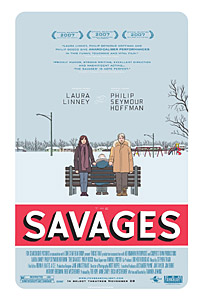 The Savages (2007, Director: Tamara Jenkins): Described by at least one critic as a “coming-of-middle-age” film, Tamara Jenkins’ quietly powerful film covers some ground familiar to many of us entering (or enduring) our forties. John Savage (Philip Seymour Hoffman) and his sister Wendy (Laura Linney) are both unmarried, childless, and absorbed in their own lives. He’s a professor in Buffalo, she’s a struggling playwright in New York. They’re not particularly close, until Wendy receives the sort of phone call that we all dread. Something’s wrong with their father, and they’ll have to put him into a nursing home. In the best of families, this would be a nightmare, but Wendy and John didn’t grow up in the best of families. It’s never made explicit, but it’s clear that their father was absent at best and abusive at worst, and they haven’t kept in touch in many years. Their mother is also out of the picture, and it’s heartbreaking to see these two trying to deal with a man neither of them knows very well.

Wendy exhibits the guilt you’d expect of a daughter who hasn’t kept in touch. She overcompensates, trying to get father Lenny (Philip Bosco) into the “best” nursing home possible, even as it’s clear his dementia renders him incapable of grasping his situation. John is more stoic, but his anger simmers until an explosive confrontation with Wendy in a nursing home parking lot. These siblings, neither of whom has really settled into adulthood, are forced to confront the fact that their father is dying. Worse, he’s beyond the point where they’ll ever get to know him or the reasons behind his mistreatment of them. I appreciated this aspect of the story, that Jenkins didn’t try to make this episode the venue for a too-pat “reconciliation.” John and Wendy remain angry and conflicted about this man, but they do their best, and in the end, the ordeal allows them to move on a little further into adulthood.

Both Linney and Hoffman are superb, and while the subject matter sounds unbearably grim, there are many moments of welcome humour and human connection. Although the direction is for the most part understated, I especially appreciated some of the cinematography near the beginning of the film, when these East Coast intellectuals must retrieve their father from the garish and bizarre retirement community of Sun City, Arizona.

This entry was posted in DVD and tagged aging, fathers-and-sons. Bookmark the permalink.

1 Response to The Savages