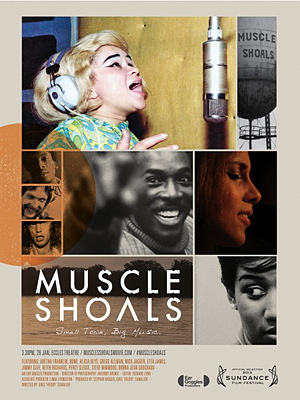 Muscle Shoals (Director: Greg ‘Freddy’ Camalier): In the 1960s, Muscle Shoals, Alabama became a hotbed for some of the greatest R&B and rock music ever recorded. How did a small town on the banks of the Tennessee River become a destination for Aretha Franklin, Wilson Pickett and The Rolling Stones? Director Greg Camalier has crafted a toe-tapping music documentary that explains the magic and music of this legendary place.

Muscle Shoals has some similarities to Dave Grohl’s film, Sound City. The famous Neve soundboard and the acoustics of the recording studios at Sound City provided the magical sound that attracted so many famous musicians. In Muscle Shoals, Camalier suggests that the physical environment has something to do with the magic of the place. The singing Tennessee River, the mud, the wind in the cotton fields, the southern lifestyle and the local musicians provide the “Muscle Shoals sound” that has inspired the famous musicians who have recorded there.

At the centre of the film is Rick Hall who founded FAME Studios and put Muscle Shoals on the map. His story is fraught with tragedy but his drive and determination to succeed created an environment that was unique. At the height of the civil rights movement he brought black and white musicians together. In one of several interviews he recalls that in the studio, the colour of your skin didn’t matter. Everyone was treated equally and collaborated to make music.

Hall brought together local session musicians who became the in-house rhythm section known as The Swampers. They had a distinctive, funky sound because they “didn’t know how to make it smooth” as one of the musicians recalls in the film. They won the respect of Aretha Franklin and Wilson Pickett and after a few records, everyone wanted the “Muscle Shoals sound.” Paul Simon called the studio and wanted to work with the incredible black musicians who played on “Mustang Sally” and “Respect.” Little did he know that they were a bunch of nerdy looking white guys.

The Swampers decided to leave Rick Hall at FAME Studios to form their own studio called Muscle Shoals Sound. Surprisingly, both studios survived and a steady stream of musicians made the pilgrimage to Alabama, including more and more rock musicians like The Allman Brothers and Lynyrd Skynyrd. Both bands recorded music here at the beginning of their careers and the Swampers argue that Southern Rock was born in their studio.

The film includes some fantastic interviews with the likes of a very entertaining Keith Richards and Mick Jagger, who describes Muscle Shoals less as a magical place and more as a place that inspired the Stones to play differently, more soulfully. Richards mentioned that the band managed to record four tracks in two days (including “Wild Horses” and “Brown Sugar”) which he joked as being pretty good for the Stones.

The film has a number of fascinating stories explaining how several famous songs came to be. I didn’t want it to end and thoroughly enjoyed the steady stream of interviews, music and the treasure trove of archival footage that is blended beautifully with modern day footage at FAME Studios.

It sounds cliché to say that the film has “beautiful cinematography” but it really does. The high production value adds to the terrific storytelling. If I had to complain about one thing, it would be the interview with Bono. It feels out of place and completely unnecessary when compared to the interviews with Aretha Franklin, Wilson Pickett, Percy Sledge and other musicians that actually recorded hit records at Muscle Shoals.