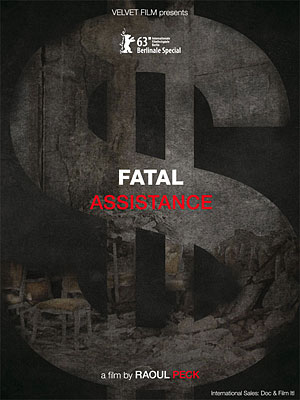 Peck’s deconstruction of the boondoggle casts most of the blame on the fact that the foreign humanitarian agencies weren’t inclusive enough with Haitian officials in determining where both financial and manpower resources should have been allocated, resulting in distrust and massive disorganization from both sides. It should be noted that the biggest reason for the lack of trust from outside agencies is Haiti’s long history of political corruption, an angle that Peck’s otherwise comprehensive film doesn’t seem to probe deeply enough. There are stories about most of the rebuilding work going to foreign contractors and companies at the expense of much-needed employment opportunities for Haitians, the unwillingness of relief organizations to allot enough attention to the dire requirement of debris removal because it wasn’t a “sexy” enough area of the relief effort (building housing and schools carries a lot more cachet), and supplies such as water and food being shipped in from donor countries at a much higher cost than if the same resources from Haiti had been used. Other exasperating examples of waste include details of some rebuilding jobs unnecessarily being worked on by multiple agencies, large amounts of relief funds mysteriously vanishing, and small wooden housing units being poorly constructed and lacking electricity, kitchens, or bathrooms.

Highly visible figures from the relief effort seen (but not interviewed) include Brad Pitt, George Clooney, Angelina Jolie, and Sean Penn, while former President Bill Clinton really draws Peck’s disdain as the co-chair of the Interim Haiti Recovery Commission (IHRC). The director frames Clinton’s involvement as rather disingenuous, as the former leader takes on numerous lofty titles and is surrounded by a young and inexperienced support staff. Peck, Haiti’s former Minister of Culture, also gets interview access to top tier Haitian government officials, such as former Prime Minister Jean-Max Bellerive. Usage throughout the film of poetic correspondence between a male and female relief worker effectively adds a more intimate perspective to the frustrations over the incompetent handling of the relief effort, acting as a sorely needed personal touch to offset the extensive number of statistics and many acronymed organizations to keep track of.

Although it can move quite slowly at times, Fatal Assistance will definitely fuel your cynicism for the effectiveness of the international community’s emergency aid process.