From Up on Poppy Hill 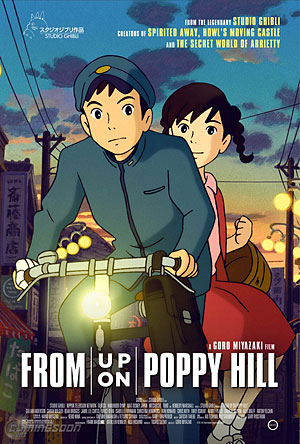 From Up on Poppy Hill opens today, Friday March 22nd, at the TIFF Bell Lightbox.

From Up on Poppy Hill (Director: Goro Miyazaki): Japan is home to the most mature animated film industry in the world. Mature in both senses of the word. First, they have been making animated films for a very long time, and these films are quite often commercially successful. Second, the industry is mature in that it doesn’t just make entertainment for children. In contrast to North America, where the terms “comics” and “cartoons” bear a slightly pejorative nuance, in Japan, everyone reads manga (illustrated stories, often serialized) and watches anime (animated films or television programmes). The subject matter is incredibly broad, as well. You can think of any type of story and chances are that Japan has a manga and/or anime about it.

Studio Ghibli has been among the most successful creators of animated work. They’re certainly the most well-known outside of Japan. This is mostly due to the vision of master animator Hiyao Miyazaki. Many of his animated features (My Neighbour Totoro, Spirited Away) are as beloved by adults as by children. The latest feature film from Ghibli is From Up on Poppy Hill, and this one is aimed squarely at adults. This nostalgia-soaked story will probably not have a lot of resonance with anyone who hasn’t already passed through their teenage years. Nevertheless the film, written by Hiyao Miyazaki and directed by his son Goro, topped the Japanese box office in 2011 for good reason.

Umi is a Yokohama schoolgirl living in her grandmother’s boarding house in 1963. Mother is away studying in America, and Father, a supply ship captain, never returned from the Korean War. Nevertheless, Umi is an energetic and hard-working young woman, cooking and cleaning for the boarding house guests. The one sign that not all is well is her daily morning ritual of raising signal flags as a tribute to her missing father. Are they a memorial, or does she really think he’ll find his way home by following them?

At school, she becomes involved romantically with Shun, the editor of the school paper, and throws herself into his crusade to save the dilapidated clubhouse where the paper (and every other boys’ club) has its office. Shun and his friends don’t believe in destroying the past, even if the rest of the country is eagerly tearing down the old to make way for the 1964 Tokyo Olympics. Instead, Umi and Shun recruit many of the students to clean and restore the old building. Along the way, their budding romance is complicated by a family secret, but this melodramatic twist only adds to the lovely poignancy of the film.

When I call the film nostalgia-soaked, I mean it. It’s set fifty years ago, and yet everyone in it is contending with events from even earlier. Japan in the 1960s was eager to throw off the legacy of the Second World War and rejoin the world, even if it meant forgetting the many sacrifices its people made. It’s lovely that the ones trying to honour the past are teenagers, who often seem unconcerned with things that happened last year, never mind things that occurred before they were born. Certainly Umi’s longing for her father is a contributing factor, but the clubhouse project adds another element, and the boys’ respect for tradition in the face of their elders’ desire for change seems quaint and idealistic.

But the film is also brave for even suggesting that the military losses of Japan, considered the aggressor in its wars against China and the Allies, are worth honouring. Those who died were members of families, who mourned for and in many cases struggled without them. Their qualities of bravery and sacrifice should not be forgotten in the shame over a misguided political ideology. Miyazaki (both father and son) finds a way to personalize these losses in a moving story about change that still finds room to honour what has come before.

This entry was posted in Theatrical Release and tagged animation, anime, japan. Bookmark the permalink.