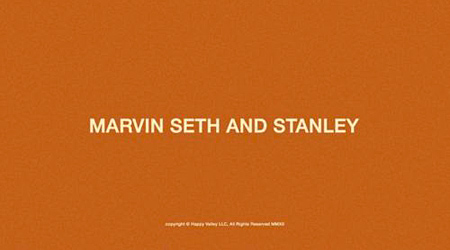 Marvin, Seth and Stanley (Director: Stephen Gurewitz): At this point, I’m sure I’d see anything with Alex Karpovsky in it. He brings intensity to everything he does, and is usually the most magnetic presence on the screen. He’s also a talented writer and director of his own work (the criminally-underseen Woodpecker (review) for instance). I first discovered his acting work in Lovers of Hate (review) and have been trying to see him in stuff ever since.

To be fair, when I say he brings intensity, I’m usually saying he plays someone who’s a bit of an asshole. That’s certainly true here. As Seth, the marginally more successful of two estranged brothers, he seems eager to leave his humble roots behind. Both he and younger brother Stanley (played by writer-director Stephen Gurewitz, looking a little bit like a young Robert DeNiro) live in Los Angeles, where Seth seems to work somewhere “in the industry” while Stanley tries to get an acting career going. They’re not close, and are only back home in Minnesota to see their father (Stephen’s real-life father Marvin Gurewitz), who’s somehow guilted them into going on a camping/fishing trip with him. It’s awkward from the very start. Marvin seems like a nice guy, but in a nebbishy kind of way. For instance, he hides the fact from his sons that he’s working at an unchallenging job at a dairy, long after they assume he must be retired. Stephen is an ineffectual chip off the old block, while Seth aggressively bullies the other two in an effort to feel superior. None of them seem like the camping type.

As the weekend wears on, and their plans continually go awry, it becomes clear that Seth’s marriage is coming apart. And despite the fact he’s with his two closest relatives, he’s unable to get anything from them. These are like three people who just seemed to end up in the same family randomly. Certainly the absence of their mother (divorced from their dad) or any other female presence accentuates their male lack of communication skills. Alcohol seems to be Seth’s tool of choice, but it never really works to connect the three men. There’s a Cassavetes feel to the scenario, primarily due to Karpovsky’s unpredictability and the handheld 16mm camerawork.

There’s humour of the wincing kind, but overall this is a portrait of sadness. It felt a lot like Cassavetes’ Husbands (review) to me, just in the way that these men have no idea how to express to each other the terrors they’re feeling. They simply lack the vocabulary. In the end, Seth tries to express a little bit of tenderness toward his brother and father, but ends up resorting to the shock tactics he’s always relied on.

Marvin, Seth and Stanley is screening on Friday February 8th as part of Fucked Up’s Long Winter series of events at the Great Hall (1087 Queen Street West). Doors open at 7pm, the movie will screen at 7:30pm with music following directly after the film from the likes of Fucked Up, Holy Fuck, The Sadies, Kids on TV, Maylee Todd, Odonis Odonis and Rituals. Incredibly, the event is PWYC (Pay What You Can). If I wasn’t going to be out of town, you can bet I’d be there. You certainly should!

This entry was posted in Special Events. Bookmark the permalink.