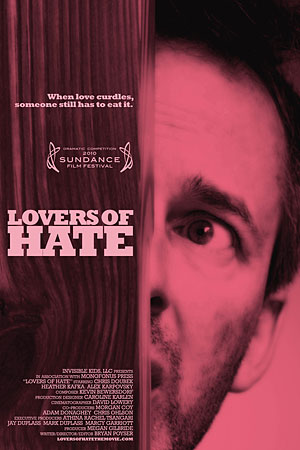 Lovers of Hate (Director: Bryan Poyser): I’m happy to use this review to introduce a new category on the blog. Late last month, Netflix finally brought their streaming movie service to Canada. Sure there have been the expected complaints that the very latest blockbusters are not available, or that the selection at launch wasn’t large enough, but luckily I ignored all that. There is plenty of great stuff to watch, and hopefully, I’ll be able to point you to some hidden gems.

Lovers of Hate played at Sundance last January, and was on my radar because it also screened at Austin’s South by Southwest Film Festival in March. I was actually at the festival, and was even at a party with the director, but didn’t have time to catch the screening itself. Such a small independent film had a very slim chance of getting a decent theatrical release in the US, never mind in Canada, so I was very happy to see it turn up on Netflix. I suspect I’ll find more overlooked indie treasures there in the months to come.

Filmed in Austin and Park City, fittingly, Poyser’s second feature (after 2004’s Dear Pillow) is a love triangle involving two brothers, a woman and one very large house. We meet misanthropic sad sack Rudy after his wife has thrown him out of the house. The first ten minutes of the film hilariously capture his attempts to bathe, first at a car wash and then in a stranger’s house. Clearly he doesn’t have much of a social safety net. When his brother Paul, a writer of popular young adult fiction, calls to tell him he’s in town for a reading, he convinces his estranged wife Diana to pretend everything’s fine so they can have a meal together, but the ruse doesn’t work for long. Paul has already let Rudy and Diana know that he’s staying in a huge house in Park City, Utah for the next month to work on his new book, and before long, each of them has shown up.

Rudy needs a place to live and shows up unannounced, only to find his brother not at home. After making himself comfortable, he hears Paul returning with someone. The giggling woman turns out to be Diana, who’s harboured feelings for Paul all along. Rudy scrambles to hide as Paul and Diana throw off their coats, and then their clothes, to consummate their long attraction. For the rest of the film, Rudy is resigned to hiding in one of the house’s many rooms, trying (and failing) not to listen to the new couple’s lovemaking and criticisms of him. It’s darkly funny, and each character carries enough baggage to make the whole thing feel sleazy while not painting any one character as a true villain. Rudy is not the only one hiding. The layers of deception and guilt and regret build, and when Paul finally figures out that Rudy is in the house, he purposely chooses not to tell Diana. The camera tells most of the story in the second half of the film, as it prowls around with Rudy, trying both to see and to not be seen.

The filmmaking is economical in every sense of the word. The single location, spare but effective dialogue, and shaded performances of the three leads all add up to a wry take on sibling rivalry, romantic deception and the meaning of success. The excellent poop jokes are just an added bonus.

This entry was posted in Netflix and tagged #sundance10, #sxsw10, austin, independent. Bookmark the permalink.

1 Response to Lovers of Hate