Posted on January 8, 2013 by James McNally
If you love short film, I’ll remind you that my next Shorts That Are Not Pants screening will be held on Thursday January 17th at the Carlton Cinemas. We’ll be showing Chloé Robichaud’s very funny Chef de meute from this selection. Advance tickets are on sale already.

On Sunday night, TIFF Bell Lightbox screened all of this year’s shorts named to Canada’s Top Ten. Here are my thoughts on the films (including two I’d seen before, Lingo and Chef de meute).

Lingo uses a static camera and long shots to sort-of tell the story of a young Afghan boy who inadvertently starts a fire that burns down a neighbour’s house. A misunderstanding lands his non-English-speaking mother an uncomfortable interview with a police interpreter. I want to applaud the daring of the filmmaker, because some of the techniques used are pretty alienating to the audience, but the end result communicates a real sense of confusion and disconnection, even when someone is supposedly speaking your language. 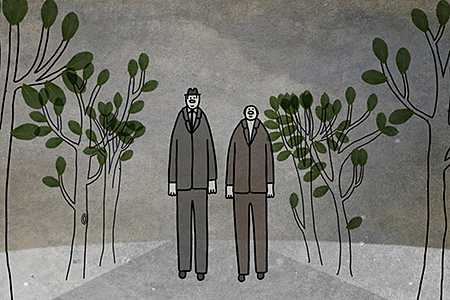 Quebec cartoonist Diane Obomsawin animates her 2009 book on the life of Kaspar Hauser, a mysterious young man found living in a German cave in 1828. The subject of several films, including one by Werner Herzog, Hauser’s mysterious origins were never discovered, nor were the circumstances surrounding his mysterious death. Kaspar presents the story in simple clean lines and its character as a trusting innocent. Telling the story in the first person gives the tragic tale additional poignancy.

An attempt to tell a story visually through reflected images is a clever gimmick, but Thibaudeau’s rather simplistic and heavy-handed portrayal of the funeral of a man who was not what he seemed was the least satisfying of the ten films for me. An interesting concept that needed more subtlety.

Remarkably similar in tone to Chloé Robichaud’s Chef de meute, but featuring a depressed cat instead of an excitable pug, this film was a delight. A lonely parking attendant is mourning his mother’s death, along with her melancholy pet. Things begin to change when he meets an exuberant telegram singer. Filmed near an amusement park closed for the winter, Paparmane uses its setting to great effect. I’m also a big fan of the way the film is able to find humour within its potentially gloomy situations.

Strange things begin to occur inside a diner where a sick girl confronts herself as a little girl. Although visually impressive and full of stylistic flourishes, Malody‘s art film opacity left me unable to connect with its characters.

Clattenburg explained to the audience that the idea for the film came to him and his co-writer/star Nicholas Wright when they were visiting Joshua Tree National Park in California. Conceived, written and filmed a scant two weeks later, Crackin’ Down Hard feels like a comedy sketch you’d expect to see on a show like Kids in the Hall. Terry is a guy who comes to the desert to get away from the hectic life he has in the city. While hiking one day, he’s confronted by a strange man who tempts him with hookers. It’s an absurd situation, and all the more hilarious as Terry gradually succumbs to the pimp’s high-pressure sales tactics. The film’s humble origins show in the rather muddy image quality, but the dialogue and comic payoff more than make up for it.

A man’s rural routine comprises this simple piece shot without dialogue. With his wheelbarrow, an old man walks along a windswept road to a forest where he chops firewood. Well-shot and with an especially good use of sound design, Old Growth is more of an experimental piece, since there is almost no focus on the man’s face.

Canadian-born Jean Benoit was the last member of the Surrealist group of artists. Using archival audio and film footage, dawson constructs a series of vignettes from the artist’s life using his own surrealistic style. Some of these techniques work really well (Benoit as a child jumping between houses and peering in rooftop windows) and some not as well (an almost endless series of zoom-ins on a painting), with the end result being a film worthy of admiration more than love. dawson spoke passionately about Benoit at the screening, and I felt disappointed that some of the quirk seemed to distract from the filmmaker’s clear love of his subject.

Based on a musical piece by Mussorgsky, Bydlo is an innovative animated film that uses images of animals and faceless people to explore the cycles of life, death and labour. The word “bydlo” comes from the Polish word for cattle and is often applied to “the masses” of uneducated, lower-class people. The dramatic use of the musical source material along with the quite amazing animation technique makes this a sobering but fascinating big picture portrayal of the seeming futility of life.

In this comedy, the humour is dark indeed. When Clara’s spinster aunt dies suddenly, her family suggest she take in the older woman’s pug, since, as a single woman herself, she has time to take care of it. When even the dog seems to boss her around, she turns to a dog trainer for help. In a hilarious sendup of The Dog Whisperer, he encourages her to be more assertive. It’s a lesson she takes to her pushy family members. Ève Duranceau plays the put-upon Clara to neurotic perfection, and the pug turns in a pretty impressive performance, too.

This entry was posted in Awards, Shorts and tagged #CT10, canada. Bookmark the permalink.