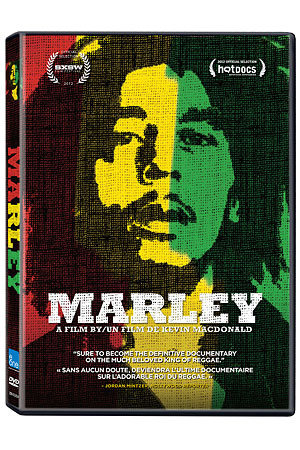 eOne released Marley on DVD and Blu-ray in Canada on August 7, 2012. Help support Toronto Screen Shots by buying it on Amazon.ca.

[Macdonald’s] unpre­ced­ented access to such a wealth of pre­vi­ously untapped resources, and his judi­cious use of them…elevate this film to some­thing truly spe­cial. More than 60 people were inter­viewed for the pro­ject and as inform­ative as the con­tri­bu­tions are from Marley’s fellow musi­cians, it’s the inter­views with less obvious fig­ures, such as Peter Marley (his white second cousin), Constance Marley (his half sister), Dudley Sibley (a recording artist and studio jan­itor who lived with Marley for a couple of years), and Cindy Breakspeare (Miss World 1976 and one of Marley’s mis­tresses) that not­ably help to humanize someone whose per­sona has taken on legendary pro­por­tions. Add in that obvi­ously great musical cata­logue from which to draw and Marley emerges as a ver­it­able treasure trove for fans, as well as an important doc­u­ment of one of the 20th century’s most sig­ni­ficant musical figures.

The DVD/Blu-ray combo pack that Amazon is selling of the film contains numerous special features, including:

This is a package that looks and, even more importantly, sounds great. If all you know of Marley is the greatest hits you’ve been hearing at Starbucks, you owe it to yourself to pick this up.