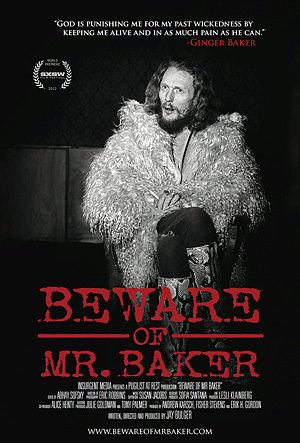 Beware of Mr. Baker (Director: Jay Bulger): The film opens with the unlikely scenario of its subject, drummer Ginger Baker, breaking the nose of the film’s director with a well-placed shot from his walking cane. Beware of Mr. Baker indeed. It’s a perfect table-setter for first-time director Jay Bulger’s biographical film on the crusty, unpredictable musician, considered by many to be the originator of modern rock and roll drumming. His reclusive tendencies and fairly obscure musical output over the past three decades (save for a high profile live reunion in 2005 with Cream, the band with which he’s most associated) have only increased the sense of mystery and legend surrounding the notorious wild man.

Bulger first brought the updated Baker story to the public in “The Devil and Ginger Baker”, his revealing 2009 written piece (PDF download), which Rolling Stone magazine printed despite the fact that Bulger had misrepresented himself as a writer for the publication in order to gain access to the musician. I vividly remember reading that story and thinking what a great doc subject Baker would make, but figured that would never happen due to his mercurial temperament. Bulger somehow ingratiated himself enough to Baker to end up staying for three months at the drummer’s fortified South African compound while working on the Rolling Stone piece, with the hours of filmed interviews from that experience laying the foundation for the documentary. As excellent as “The Devil and Ginger Baker” was, Beware of Mr. Baker does it one better – his tumultuous life story is so intriguing that it virtually demands the full-length doc treatment.

Bulger assembles a Who’s Who of rock drummers singing Baker’s praises, including Stewart Copeland, Lars Ulrich, Neil Peart, Chad Smith, Charlie Watts, Nick Mason, and Bill Ward. Also weighing in is Johnny Rotten in a couple of amusing scenes that bookend the film. It’s worth noting that Baker despised much of the music that Cream influenced – he says punk “should have been aborted,” cringes upon hearing he had an influence on heavy metal, and mocks the talents of John Bonham and Keith Moon. Cream bandmates Eric Clapton and Jack Bruce provide some fascinating insight into the difficulties of working with a loose cannon drummer who was well into the throes of heroin addiction during the supergroup’s short two year lifespan. Clapton’s conversations reveal a love/hate relationship with the drummer and he makes the interesting observation that although he’s known him much longer, perhaps Bulger knows the enigmatic Baker better than he does due to the fact that unlike himself, the director has now spent so much time in close proximity with Baker.

The “career retrospective” portion of the film demonstrates Baker’s propensity for short-lived group stints and burned bridges, resulting in an increasingly shrinking pool of musicians willing to work with him and fuelling the drummer’s feelings of alienation. Baker’s love of jazz is a key focal point of the documentary – he began as a jazz drummer and worshipped the genre’s biggest percussionists, even boldly organizing a televised drum-off with some of them as an excuse to both play with the jazz drumming elite and to earn their respect. Another focal point is Baker’s time spent in Africa in the 70s, where he explored his passion for the continent’s music and worked with Afrobeat icon Fela Kuti, before eventually being forced out of Nigeria due to political unrest.

Nearly all of Bulger’s fiery interviews with Baker feature the drummer chain smoking while propped in a recliner; at one point, Bulger asks his subject to remove his ever-present sunglasses and, after some reluctance, Baker agrees. His eyes appear sad and rather dead-looking, showing the effects of seven decades of self-destructive behaviour and the steady helping of morphine being used to help ease his various health ailments (“God is punishing me for my past wickedness by keeping me alive and in as much pain as he can. I wasn’t planning on living this long”, he says). Some of the other fallout from his lifetime of selfish and reckless behaviour: four marriages (he’s currently married to a 29-year-old Zimbabwean woman whom he met on the Internet), estranged relationships with his kids (he once introduced his 15-year-old son to cocaine), and persistent money issues (he blew through an estimated $5 million earned from the Cream reunion and spent it on donations to animal causes and his hobby of collecting polo ponies).

Bulger applies the stylistic flourish of animated artwork to subtly advance and supplement the film’s narrative, as well as add a comedic touch in places. The German Expressionist-style art is dazzling, but the director tends to overuse the device; not to mention that the same technique using the same art style was seen last year in the U2 documentary From The Sky Down (to be fair, Bulger’s film was likely finished by the time the U2 doc came out). Aside from that, my only quibble with Beware of Mr. Baker is that it feels somewhat incomplete at 92 minutes. That’s actually a testament to how engrossing Bulger’s portrait of the irascible and uncompromising Baker is, but slightly more content would have been welcome from a documentary offering such rare access to one of rock history’s most colourful characters.