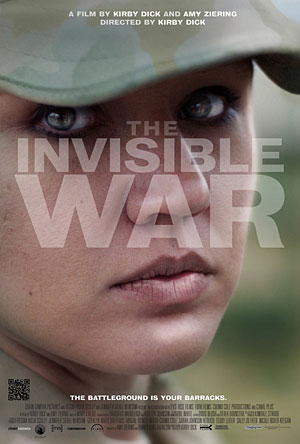 The Invisible War (Director: Kirby Dick): Kirby Dick (best known for This Film Is Not Yet Rated, Twist Of Faith, and Outrage) turns his investigative lens on the surprisingly underreported subject of rape, sexual assault, and sexual harassment in the US military. “Military Sexual Trauma” (MST), as the US Department of Defense labels it, occurs with such disturbing frequency that it’s impossible to argue with Dick’s usage of “epidemic” in describing the problem, which he backs up with plenty of statistics. Among the most sobering numbers (all pertaining to the US military): approximately 20% of women serving have been the victim of MST, 80% of victims don’t report the crime, the sexual assault rate in the military is approximately double the rate in the civilian world, and less than 10% of MST cases are prosecuted. That last stat forms the basis for one of The Invisible War‘s main aims, exposing such an appallingly ineffectual track record by the military in dealing with the problem that it makes the Catholic church look positively proactive in their handling of pedophile priest accusations.

The wealth of powerfully affecting victim interviews conducted by Dick and producing partner Amy Ziering reveal a disturbingly similar pattern: following their traumatic experiences (many suffered multiple assaults), the victims’ complaints aren’t taken seriously and they receive no justice, leading to the end of their military careers, relationship problems, depression and other medical issues, and eventual suicide attempts. MST is an issue that also affects males, as we learn through the story of one rape survivor who kept his secret for 30 years before telling his wife. Dick wisely picks one subject to spend a little more time with in former US Coast Guard seaman Kori Cioca. She suffered irreparable damage to her jaw while fighting off her rapist and is shown going up against governmental bureaucracy as she tries to get disability benefits, dealing with a frustratingly incompetent medical system (the amount of pain medication that she’s been prescribed is staggering), and struggling to be a good wife and mother while dealing with the emotional toll from her ordeal. One of the film’s most gut-wrenching interviews comes from the father of one of the victims, as he breaks down while recalling the phone call from his daughter about her rape. Additional helpful perspective is contributed by retired military captain Anu Bhagwati, who heads a support service for females affected by MST.

Almost as disturbing as the horror stories from the victims is the revelation of how the military fostered such an unsafe environment with their apathy, cover-ups, and inadequate MST preventative measures and education. A couple of interviews with Kaye Whitley, the former director of the defense department’s Sexual Assault Prevention and Response Office, point to some of the problems concerning the latter of those. Whitley delivers uninformed, textbook examples of government talking head responses to her questions, defending her office’s educational policies that promote ad campaigns such as the one that actually said “Don’t risk it – ask her when she’s sober,” as well as others that seem to place an unsettling amount of blame on the victims (one instructional video scenario shows male soldiers mildly chastising a female soldier for walking around the military base at night without a safety buddy). It’s certainly not reassuring that the culture will change when we hear Whitley’s successor, Mary Kay Hertog, praising the work of her predecessor. Tough questions are also posed to members of Congress and powerful military officials, who regurgitate the institution’s official policy of “zero tolerance” on MST incidents. That policy is shown to be toothless, however, with assault complaints frequently getting reviewed by the accused rapists’ colleagues and friends, and filed grievances a proven fast-track to career implosion for the complainant. Two victims reveal that they were charged by the military with adultery because their rapists were married, and one of them adds that she was also charged with public intoxication and conduct unbecoming after the ordeal.

The Invisible War is an extremely compelling and important piece of filmmaking that will evoke anger, shock, compassion, and hope from its viewers. Not content to take a passive role in the discussion of its subject, the documentary concludes by extending its reach and assuming the role of anti-MST advocate, providing information on support services and encouraging participation and discussion on the topic. Dick proudly announced at the post screening Q&A session that it appears the film has already had an impact since it debuted at the Sundance Film Festival in January and also started making the rounds in Washington: the Pentagon recently announced new initiatives to address the MST problem, including the significant step of having assault investigations placed further up the chain of command to assure impartiality.