It’s hard to believe, but I will be attending my ninth Hot Docs this year. My favourite film festival celebrates its 19th edition from April 26th through May 6th with an abundance of new energy. From a new programming director (Charlotte Cook) to a newly-reopened showcase Bloor Cinema, this year’s festival promises to satisfy and even exceed Toronto documentary fans’ high expectations.

Here are a few films on my personal radar. If I’ve been able to see the film ahead of the festival, I’ll provide a capsule review. Otherwise, I’ll just tell you why I’m interested in seeing it.

Look for a few more of these in the weeks to come, along with full reviews from me and the “Doc Brothers,” Jay and Drew Kerr.

It’s a terrible and probably offensive stereotype, sure, but Rachel Wotton really is a “hooker with a heart of gold.” This Australian sex worker specializes in working with disabled clients, believing that everyone has a right to express their sexuality. The film spends a bit too much time following Rachel around as she attends conferences and protests, but does manage to provide some great insights into the sex lives of people who are too often marginalized. More time spent interviewing both the clients and Rachel would have been enlightening, since the film raises all kinds of issues around both the dignity of sex work and of living a full human existence, no matter what society thinks.

A group of twentysomething hipster friends in Portland buy an old yearbook and become obsessed with the graduating class. When they realize the class will celebrate their 20 year reunion, they buy tickets online and set out on a road trip. This “oh-so-ironic” homage to the ’90s falls flat as the gang try so desperately to have “cool” experiences with 40-year-olds whose personas they have created in their fantasies. They get a comeuppance of sorts, but the whole adventure is not particularly satisfying to anyone.

Directed by the team behind the deeply personal October Country (2009) (review), this film takes on the epidemic of prescription drug use among Americans, especially “off label” use, where the drug is taken for reasons other than the medically indicated purpose. I am curious to see how filmmakers who seem to approach their work from such a deeply humane and impressionistic perspective take on subject matter usually covered in a more “issue doc” fashion. 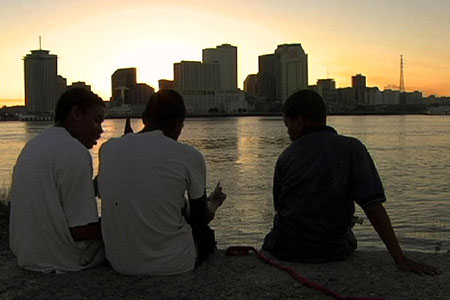 The brothers Ross previously made 45635, a gorgeously meditative look at their own hometown of Sidney, Ohio. Here they turn their attention to New Orleans, following a group of three teen boys as they sneak out one night to discover the city and its music.

An anthropological reflection, similar to films like Life in a Day or even Babies, Kossakovsky’s documentary takes the idea of “antipodes” (geographical points on opposite sides of the globe) as its starting point. Contrasting ways of life in 8 different places (4 pairs of antipodes), his camera lingers and even flips to reveal the many facets of life on this planet.

Shot in the Mamelodi township during the 2010 FIFA World Cup in South Africa, this film examines the football phenomenon from the perspective of those just outside of the big party. The euphoria that greeted the beginning of the tournament (and the South African team’s better-than-expected performance) gradually gives way to a more realistic picture of their chances, both in the sporting arena and more personally.

Stay tuned for more previews as the festival approaches. And visit the Hot Docs box office at 783 Bathurst (or online) to get your tickets.