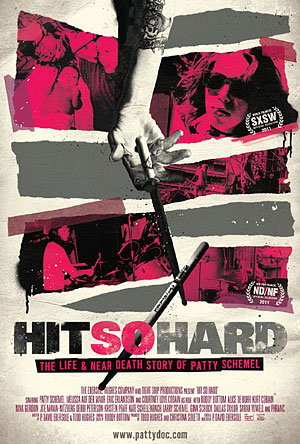 Hit So Hard (Director: P. David Ebersole): Screened a few weeks back as part of Toronto’s Canadian Music Week film program, Hit So Hard (subtitled The Life & Near Death Story Of Patty Schemel) explores the former Hole drummer’s career and struggles with addiction, set partially against the backdrop of the rise and fall of the Seattle grunge scene. Director P. David Ebersole combines interviews with Schemel filmed over a period of several years with archival footage, much of it shot by the drummer herself. Ebersole also features extensive interviews with Schemel’s former Hole bandmates Courtney Love (lead singer/guitarist), Melissa Auf der Maur (bassist), and Eric Erlandson (guitarist). The entertaining interview segments with the notoriously unpredictable Love show her at various points talking with her mouth full, sitting with her legs splayed over the arms of the chair she’s in, and generally just coming across as a train wreck. These portions scream out for Love to get her own feature-length documentary treatment.

Devout Hole fans will likely find much to enjoy in the wealth of behind-the-scenes footage of the band, most of which has never been seen before. For the rest of us, however, it isn’t terribly revealing, offering up the standard music visual document of mundane life in the recording studio and on the road in a variety of bus, backstage, and hotel room settings (there’s also some decent live footage). One of the subjects Schemel’s video camera captured is Kurt Cobain; she stayed at the residence he and Love shared for an extended period, and we see the Nirvana frontman in some private moments with his newborn daughter, as well as singing and playing an acoustic guitar during a brief snippet. These scenes aren’t particularly interesting and will only hold some value for Nirvana disciples.

Schemel joined Hole in 1992 and spent six years with the group, playing only on their lauded Live Through This album. The sections discussing the difficult recording sessions for its followup, Celebrity Skin, are some of the film’s most interesting, as we find out that all of Schemel’s parts were replaced by a studio drummer (although she is credited in the album’s liner notes). Despite battling a drug addiction at the time, Schemel maintains her playing was fine and that producer Michael Beinhorn played head games with her, ultimately turning the rest of the band against her (Beinhorn has a history of difficulties working with drummers). Erlandson, Auf der Maur, and Love all agree that working with Beinhorn was an unpleasant experience and now regret their decision not to show more support for their bandmate, who eventually quit. At a question-and-answer session following a Hit So Hard screening last year, Love said Beinhorn was “still a Nazi fuck” after curiously working with him again on Nobody’s Daughter, the 2010 Hole album that didn’t include Erlandson, Auf der Maur, or Schemel (read my review here). After leaving the band, Schemel descended further into drug addiction, unable to heed the cautionary tales of friends Cobain and original Hole bassist Kristen Pfaff (who fatally overdosed a couple of months after Cobain’s suicide). By the end of the 90s, Schemel’s heroin, crystal meth, and crack habits had left her homeless and turning tricks for drug money.

I found it interesting that whether by choice or not, Ebersole’s film doesn’t include any interviews with either of the surviving members of Nirvana, nor anyone from the other two biggest 90s Seattle bands, Soundgarden or Pearl Jam. A small collection of other 90s alt-rock contemporaries are interviewed, including Veruca Salt’s Nina Gordon, Luscious Jackson’s Kate Schellenbach, and Roddy Bottum from Faith No More and Imperial Teen. Ebersole also expands the doc’s focal point to probe the role of women drummers in rock history, although the fact that two of the principals interviewed are the drummers from The Go-Go’s and The Bangles doesn’t add much musical credibility to the discussion, quite frankly. In my eyes, a glaringly obvious omission to any discussion of women in rock, particularly because they’re actually from Seattle, are Heart’s Ann and Nancy Wilson. Through Schemel’s own experience as a lesbian in the music industry, Ebersole also briefly explores the history of gay women in rock and the adversity they’ve faced.

The documentary’s biggest negative is that it fails to present a fully-formed picture of the drummer’s post-Hole life. Schemel recounts calling Love for financial help while homeless, but there’s no sense or indication from the interviews with Love, Erlandson, or Auf der Maur of whether or not any of them currently have a relationship with her. They all speak warmly and caringly of Schemel; Auf der Maur, in particular, was quite close with her during their time in the band, and it would have been nice if Ebersole had defined this crucial element. One of the things I enjoyed about the movie was that it didn’t deliver a seen-it-before ending where Schemel makes a triumphant return to the music business. We see her sober, happily married, and fulfilled with a newfound career in the dog care business. As Ebersole tells it, Schemel essentially abandoned any serious pursuits in the music industry after getting her life straightened out, occasionally playing in a band with her brother and acting as a drum instructor/mentor to young women. Upon further research, however, I found that the director egregiously failed to include the facts that Schemel actually recorded with Juliette And The Licks (the punk band featuring actress Juliette Lewis), toured with Imperial Teen, and collaborated with Love a couple more times: in a short-lived band called Bastard and again on Love’s 2004 America’s Sweetheart solo album. On the latter, Schemel co-wrote five songs (incorrectly listed as ten songwriting credits on the album’s Wikipedia page) and contributed drum tracks to the project.

Schemel’s story should make for a more compelling viewing experience than Hit So Hard delivers. The highly likeable musician’s colourful and harrowing tale make her a primo documentary subject, but the film’s incompleteness undermines the end result.

This entry was posted in Documentaries, Film Festivals and tagged #cmw2012, music. Bookmark the permalink.