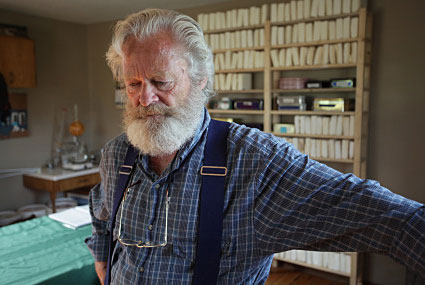 Wiebo’s War (Director: David York): David York opens his engaging film with an interesting scene. Wiebo Ludwig, the subject of the film, is sitting around a table with several of his sons and the film crew, and Wiebo is concerned that most of what he stands for “won’t come across” because the director and crew are atheists.

It’s a bold move, and potentially one that will put many people off Ludwig right away. But it’s also a necessary tactic, because for the next 90 minutes, it will be difficult not to be pulled in by Wiebo’s charisma, passion and evident good sense.

In the mid 1980s, Wiebo Ludwig, an ordained minister with the historically Dutch Christian Reformed Church, decided to uproot his family from their Ontario home to go and live “apart from the world” in northern Alberta. It was an experiment in holy living, but also in self-sufficiency and community-building. Along with another couple and all of their children, they settled on a parcel of land they dubbed Trickle Creek. As their children grew older, they intermarried and had their own children. They raised animals and were able to support themselves in both food and energy.

But these were not technology-shunning ascetics like the Amish. They wanted to farm and worship God, but were happy to be part of the wider world when they needed it. Unfortunately, the world quickly impinged on their bit of paradise.

In the late 1980s, the oil and gas industry moved in when they discovered that Trickle Creek was sitting over a huge reservoir of natural gas. One of the most shocking revelations of the film is that despite the Ludwigs’ deed to their land, they only own the top six inches, and have no ownership or control of the mineral rights that the EnCana gas corporation is so eager to exploit. Whether this is Canadian law or just Alberta’s, I still think it’s something that needs to be challenged.

York’s film uses lots of material shot by the Ludwigs over the years, including flaming tap water, an image used more recently by Josh Fox’s Gasland (review), which would make a great companion piece to this film. There’s also horrific footage of dead and deformed livestock, and in one indelible scene, a stillborn infant.

In the 90s, the Canadian news media was abuzz at a campaign of sabotage against the oil and gas industry including explosions at well sites. Ludwig was convicted in connection with these acts and served 18 months in prison. Many years pass but now there is another string of bombings in northern British Columbia, and Ludwig is again the prime suspect. Even though York follows him for several years as these events play out, we never really know the extent of Ludwig’s involvement. We do, however, begin to understand the extent of his family’s desperation to live unmolested.

Since Wiebo is eager to declare that his actions flow from his biblical principles, I think it’s cogent to examine them. Ludwig and his family are in a unique position, able to fulfil the biblical function of the prophet, which is to speak the truth to power. But in the process they are also subject to another biblical maxim: that a prophet is without honour in his own country. Their separation from the community allows them the freedom to criticize the oil and gas industry because they are not economically dependent upon it. The people in the towns around them don’t have that luxury, and so there is a built-in resentment that is only stoked higher by the Ludwigs’ religious beliefs and practices, which are subject to small-town gossip and distortion. It’s a fascinating dynamic to watch at work, and it is behind another of the film’s unsolved mysteries, the shooting death of a local girl on the Ludwig’s property after two truckloads of drunken teenagers arrive in the middle of the night to harass them.

It dawned on me that if this film had been set in the developing world, audiences would feel immediate sympathy and even solidarity with someone who was resisting a greedy corporation and an apathetic government. Because it’s so close to home, I think reaction will be more mixed. The oil and gas industry has been quick to brand Ludwig an “eco-terrorist” and the Canadian media has been happy to advance this characterization. York’s film will help shade the black and white caricature we’ve been provided with, although Ludwig remains a complicated man. His initial misgivings are not groundless, and for a man who claims to answer only to God, his participation in the film is pretty remarkable. If it brings some additional critical attention to the practices of an industry that powers so much of Canada’s economy, it will be worthwhile.