The Times of Harvey Milk 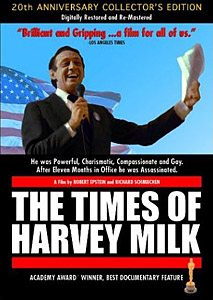 The Times of Harvey Milk (1984, Director: Rob Epstein): With all the publicity around Milk, Gus Van Sant’s biopic of pioneering gay political figure Harvey Milk, I’d been hearing on good authority that Rob Epstein’s Oscar-winning documentary, now almost 25 years old, was better in almost every way. So before seeing Sean Penn’s fictional portrayal (which even from the trailer looks powerful), I wanted to learn more about the man and his story.

Milk was the epitome of a local politician. He owned a camera store in the San Francisco neighbourhood known as the Castro and became involved in politics because of neighbourhood issues. He ran for the position of city supervisor (councillor) three times unsuccessfully, until a change in the rules allowed each neighbourhood to vote for its own supervisor. Buoyed by the gay vote, he was finally elected in 1977, but only served 11 months before he and San Francisco’s mayor, George Moscone, were shot and killed by one of their colleagues, Supervisor Dan White, who’d resigned and then been unsuccessful in getting his job back. Milk is regarded as America’s first openly gay politician, and he knew there was always a risk of assassination. In fact, Epstein’s film begins with an audio recording Milk made about a year before his death, stating that it should only be played in the case of his death by assassination.

The film itself is a combination of local news footage and interviews with his friends. The narration by Harvey Fierstein conveys the sense of sadness and loss that the gay community were still feeling. In fact, the film was made just six years after Milk’s death and the emotions of the interviewees are still raw, especially when discussing the subsequent trial of White, who served only five years for the murders. The gay community was outraged at the lenient sentence, and Epstein covers the “White Night Riots” that followed the verdict. White’s lawyers successfully argued that he was suffering from depression and didn’t intend to kill Milk and Moscone, despite the fact that he confronted them in their offices with a gun (and extra ammo) he smuggled into City Hall by climbing in a window to avoid the recently-installed metal detectors. This case was also the origin of the infamous “Twinkie defense”, in which his lawyers argued that he may have been suffering from the effects of eating too much junk food, and therefore had “diminished capacity” for thought, making him incapable of premeditation in the killings.

Although the film does succeed in portraying Milk as part of a movement, rather than just a saintly crusader, I would have liked a bit more detail about him and his life. There was very little mention of his partner Scott Smith or his life before he came to San Francisco in 1972 at the age of 42. Interviewers hinted at his bursts of temper, but I would have liked to hear more about his volatile personality. Archived recordings show that he was a powerful speaker, but his battle to get elected shows that he wasn’t able to win over everyone. He had many political rivalries, even with other gay activists, and although it would have made the film longer, it would have also made it more nuanced. As well, I found out that Dan White had been a Vietnam vet, a police officer and a fireman before becoming a city supervisor, and I think more exploration of his background would have made the film stronger, especially in light of the fact that he committed suicide in 1985, less than two years after his release.

Overall, Epstein captures the spirit of the times, and the sense that Milk was carried along on the changing political current. He was not only America’s first openly gay politician, but its first gay martyr. In the light of the popularity and critical acclaim for Van Sant’s film, I would love for Epstein to revisit the subject in another film someday.

This entry was posted in Documentaries, DVD and tagged assassination, homosexuality, politics. Bookmark the permalink.