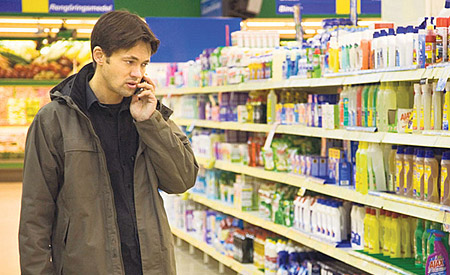 Recipes for Disaster (Katastrofin Aineksia) (Director: John Webster): Anglo-Finn director John Webster decides to put his family (wife and two young sons) on a strict oil diet for a year and to film the results. Ignore the standard archival footage and serious voiceover about the problems of climate change; the most interesting thing about this film is definitely the family dynamics. Webster’s wife is a reluctant participant and avoids telling her work colleagues about the experiment, not wanting to draw attention to her family. She also calls out Webster for his self-righteousness several times, at one point sarcastically calling him “a real Jesus.”

And it’s a valid point. After Webster bans all oil products, including plastic, from his family’s life, things become very difficult indeed. They try to make their own toothpaste, with predictably dire results. They are forced to buy industrial rolls of toilet paper to avoid plastic packaging. It’s not enough for Webster, who decides they need to throw out nearly every plastic item in their house. In short, his obsession makes him less and less sympathetic as the film progresses. In the eyes of his family, especially his wife, he becomes well-nigh insufferable.

Luckily, by the end of the film, he’s recognized the ridiculousness of his behaviour, while still acknowledging the importance of his crusade. After the year is up, the family continue with a modified form of their diet, while still allowing certain items such as toothpaste. Webster had replaced his car with one that had been modified to run on biodiesel, and he continues to drive that. He buys his electricity from a green source, and equips his cottage with solar panels. All in all, he recognizes that he cannot change the world all by himself. In fact, he can’t even change his family without some compromise. But the film provides an entertaining lesson in what can actually be done, and it makes its points with self-deprecating humour.

Normally, Doc Soup screenings are accompanied by a Q&A with the director present. Since it would go against the director’s principles to fly from Finland to Toronto just to answer questions, he spoke to the audience via Skype videochat. This worked remarkably well, and showed that he was still attempting to live up to the lofty goals with which he began, to reduce his family’s carbon footprint.