The King of Kong: A Fistful of Quarters

The King of Kong: A Fistful of Quarters (2007, Director: Seth Gordon): I missed this at SXSW last year but have been hearing great things about it ever since. Despite the unwieldy title (why not just “The King of Kong”?), Gordon’s film is a crowd-pleasing tale of good and evil in the geeky world of retro videogames. It reminded me quite a bit of Darkon (review) (a film about live-action role playing gamers), but without some of the self-deprecation. These guys take their hobby extremely seriously. But as in Darkon, the set up involves two very different personalities: for lack of better terms, the bully and the underdog.

Billy Mitchell is the guy who set the Donkey Kong record back in the 1980s, while a teenager, and he’s grown up milking that “fame” for all it’s worth, building up a hot-sauce “empire” and opening a restaurant. He has the swagger of a motivational speaker and isn’t remotely aware of how comical his persona comes across to anyone not in his circle of gamer fanboys. Like the jock in high school, he’s built his whole life around something he accomplished as a teenager. Many people tried and failed to beat Billy’s high score. And then along came Steve Wiebe. Blank to Billy’s brash, Wiebe has the stolid demeanour and look of Al Gore or Troy Aikman, without their achievements. We hear about all the talent he showed as a young man, and then how he’s repeatedly failed to live up to his potential. His pursuit of the Donkey Kong record becomes a sort of Holy Grail for him and his family. He feels that if he can just be the best at something, anything, then he’ll have the confidence to take on the world. He’s a decent guy, a little shy, and reluctant to force a confrontation. But when his record-breaking game is disallowed by Twin Galaxies, a group of ostensibly impartial “referees” with a strong connection to Mitchell, he resolves to claim the record at any cost.

He travels to a game competition on the east coast so he can attempt to break the record “live” (he’d mailed his previous attempt on videotape, a common practice among videogamers) and is eager for a face to face challenge with Mitchell. But like Achilles sulking in his tent (and with the same vulnerable heel), Mitchell refuses to engage Wiebe. Instead, he sends his own videotape, and the gathered group of gamers actually sit and watch that rather than witness Wiebe’s live attempt.

I won’t spoil the story except to say that even after the film’s end, the battle is continuing. The King of Kong is an entertaining examination of a subculture many of us may remember, even if its continued existence is based on nostalgia and arrested development, as well as of two men’s struggles with what it means to be a “winner”. I just wish some of the people I found myself laughing at had the ability to share the joke. 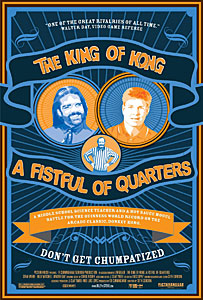 Buy The King of Kong: A Fistful of Quarters from Amazon.ca

Buy The King of Kong: A Fistful of Quarters from Amazon.com

This entry was posted in Documentaries, DVD and tagged adolescence, manhood, success. Bookmark the permalink.

2 Responses to The King of Kong: A Fistful of Quarters