The Monastery: Mr. Vig and the Nun 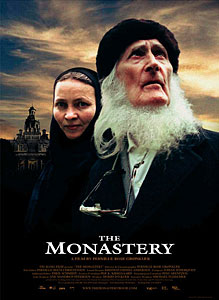 The Monastery: Mr. Vig and the Nun (Director: Pernille Rose Grønkjær, Denmark, 2006): Mr. Vig is an elderly bachelor living in a broken-down castle. For years, he has dreamed of establishing a monastery there, “to create something enduring,” and so, sensing he doesn’t have long to live, he invites the Russian Orthodox church to use his property. They send a small group of nuns to check the place out, including the shrewd Sister Amvrosya. They leave and then return in a few months, and Mr. Vig spends time trying to clean and fix the place up. Once the nuns are more established, he finds himself butting heads with Sister Amvrosya over the renovations and the future plans for the monastery. But for the first time in his life, he seems to have entered a domestic relationship with a woman, and finds the contentment that seems to have eluded him in his long life.

This film was unbelievably touching and beautiful, from the 35mm cinematography (which is becoming rarer all the time in the world of documentary filmmaking) to the soundtrack to the very low-key direction. There are many small grace notes throughout the film, like shots of Sister Amvrosya and Mr. Vig walking in the garden, or her preparing food for him. Everything is unspoken, but there is a very real bond between these two.

Throughout the film, Mr. Vig laments that he just isn’t like other people, that he doesn’t know anything about love, that when it comes to emotions, he’s “deformed” or “a cripple.” And yet, he invites people into his house, invites God into his house, and it somehow becomes a home.

The metaphor seems obvious but it’s true. The house is the man. Ramshackle, run down, a little dirty, perhaps, but full of interesting things and stories, and ultimately beautiful. This quietly powerful film will stay with me for a long time.

2 Responses to The Monastery: Mr. Vig and the Nun