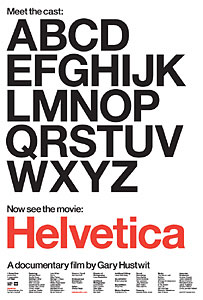 Helvetica (Director: Gary Hustwit, UK, 2007): This was THE hot buzz film of the festival, and a lot of people didn’t get in to see it who wanted to. I’m still a bit baffled that there could be that many font geeks in Toronto, but I suppose that since we all use computers now, everyone knows what Helvetica is.

Gary Hustwit is the co-founder of Plexifilm, and has been involved as a producer in the making of a number of documentaries, but for his first project as a director, he chose to explore the legacy of Helvetica, a font which is celebrating its 50th anniversary this year. Despite its age, it seems as popular as ever, appearing in logotypes for companies as diverse as Toyota, American Airlines, Target, Crate and Barrel, and American Apparel, to name just a tiny fraction. What has allowed Helvetica such longevity, where other more recent trends (like the grunge fonts of the mid-90s) have flamed out already? Opinions differ wildly.

According to some, Helvetica feels like the final version of sans serif typography, and attempts to improve upon it just fail. For others, the arrival of the computer and the installation of default fonts just means that people are lazy. If you thought a bunch of well-dressed graphic designers arguing over a typeface would be boring, you’d be ever so wrong.

Spanning several countries, Hustwit’s film takes us inside the studios of such leading lights of design as Matthew Carter, Erik Spiekermann, Massimo Vignelli, Jonathan Hoefler, Tobias Frere-Jones, Stefan Sagmeister, and David Carson. If these names mean nothing to you, you’ll still mostly enjoy the film, a beautifully-designed thing which is punctuated by real-world examples of the font in use, shot in rich high-definition and set to a wonderful soundtrack. You may just tune out all of those designer concepts and controversy.

And if you do know the names? Well, font geeks, not only are you in for a treat, but this fall, Mr. Hustwit will have a wonderfully jam-packed DVD to sell you.

Here is the Q&A with director Gary Hustwit from after the screening:

Q&A with director Gary Hustwit from the Hot Docs site