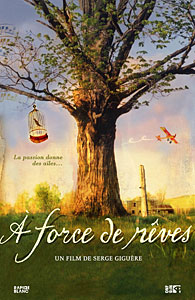 Driven By Dreams (À force de rêves) (Director: Serge Giguère, Canada, 2006): This film recently won Quebec’s top film honour, the Jutra award, for best feature-length documentary. It’s a gently-told cinema verite account of five elderly people, ranging in age from 74 to 92, as they continue to live their lives to the fullest. They paint, they make music, they fly radio control airplanes, and they talk about dying. It’s a quiet film, set mostly in rural Quebec, and it takes its time with its subjects, but mixed in with the contemplation is a healthy dose of humour.

We experience with these unique and lovable individuals the pain of losing a spouse, or being forced out of your home, or the small indignities that go with aging. This is the sort of film that was really made in the editing, and although the finished film feels seamless, the editing process took quite a while. As well, the film was helped immeasurably by the soundtrack, which featured a big band composed of seniors, and which appears at various points in the film.

This film touched on some of the same issues as The Monastery: Mr. Vig and the Nun, but without (for me) the same emotional power.

Here is the Q&A with producer Sylvie Van Brabant from after the screening:

UPDATE: The film was awarded the Special Jury Prize Canadian Feature Documentary at the Hot Docs Awards ceremony held on April 27. Congratulations to director Serge Giguère and everyone involved in the film.