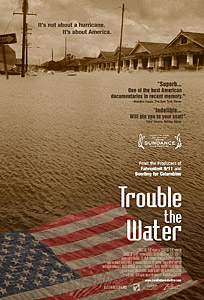 Trouble the Water (2008, Directors: Carl Deal and Tia Lessin): Hurricane Katrina devastated the city of New Orleans and much of the Gulf Coast more than three years ago now, but many of the city’s most impoverished neighbourhoods have yet to be rebuilt. Kimberley Rivers Roberts and her husband Scott Roberts lived in the Lower Ninth Ward, and documented the hurricane’s impact with a cheap video camera they had purchased “on the street” for $20. When directors Deal and Lessin’s planned film about the return of National Guard troops from Iraq to New Orleans fell through, they found themselves talking to evacuees looking for another angle on the tragedy. Kimberley and Scott offered not only their footage, but themselves as subjects. Mixing the shaky and low-quality Hi-8 stuff shot by Kimberley and her friends and family during the storm with news footage and newly-shot material, the directors have assembled a devastating indictment of government indifference and incompetence in the face of a large-scale disaster. But due entirely to the incredible strength of character on display from this young husband and wife, the film emerges even more as a record of ordinary people discovering courage and decency they didn’t even know they possessed.

Before Katrina, Kimberley and Scott got by by dealing drugs in their neighbourhood, and so they surprise not only the audience but themselves by emerging as genuine heroes during the storm, rescuing, sheltering and finally evacuating a group of more than 25 people, all of whom had no way to evacuate before the hurricane hit. This heroism emerges precisely because the residents of this part of the country knew, even before Katrina, that they would have to take care of each other, that no government was going to do anything for them. One of the film’s most powerful moments comes after Kimberley recovers a CD she recorded as an aspiring rapper. As she sings along to the track, we can almost see the depths of both pain and determination that have sustained her from well before this latest calamity. She’s a survivor and a fighter, and a particularly good representative of the sort of people that have always been marginalized by the larger society. She and Scott call themselves “born hustlers” and that’s helped them to survive. Even the canny way that they enlisted the filmmakers to not only tell their story, but to help them rise above it, is a testament to their street smarts.

The bright side of the tragedy for them was that they realized their lives pre-Katrina were going nowhere. Seeing that they were capable of much more, they’ve been able to turn things around. Kimberley’s music career is progressing, and Scott is learning the construction trades as he helps rebuild houses in his own neighbourhood.

If there are any flaws in this film, they’d be relatively minor. The quality of the Roberts’ footage, obviously, isn’t great. As well, their accents and dialect had many in the post-screening Q&A begging for subtitles. Finally, the editing together of so many different sources creates a slightly confusing timeline. But as a document of both a great tragedy and a personal resurrection, Trouble the Water is pretty powerful.

UPDATE: The film will be released theatrically in Toronto in January 2009, and is being distributed by E1 Films.

Here is the Q&A with directors Carl Deal and Tia Lessin from after the screening:

3 Responses to Trouble the Water