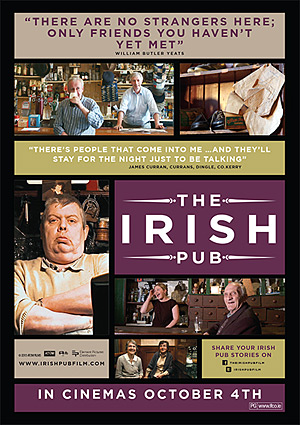 The Irish Pub plays from October 24-30 at the Carlton Cinemas and the Kingsway Theatre in Toronto.

The Irish Pub (Director: Alex Fegan): I was born in Ireland and although my parents brought me to Canada when I was just a toddler, I’ve been back more than a dozen times in my lifetime, and have some great memories of time spent in traditional Irish pubs. So it wasn’t too difficult to convince me to watch this new documentary about these unique places. Director Fegan takes his camera around Ireland and spends most of his time in country towns where the pubs have often done double duty as grocery stores (and in one case, even as an undertaker’s). That should give you an idea of how essential these places have been in the history of the country. Far more than just a place to drink, the pub has been at the centre of social life for the community, including the arts for which Ireland has become famous. It seems that every pub in this film is filled with storytellers and musicians. In one case, a publican became a rather well-known playwright even as his customers knew that most of the plots had been lifted almost directly from the conversations he’d overheard through the years.

The film allows many of the pub’s owners and customers to relate some of the stories that have made each one unique. In a few places, there are (largely unnecessary) subtitles. Many of the pubs are set in postcard gorgeous settings. The camera lingers lovingly on items of bric-a-brac, and on faces. It’s a leisurely-paced film with no real structure, and no grand thesis. Instead, it simply aims to document people and places that seem in danger of disappearing forever. As such, it’s a pleasant experience, although surely a bit romanticized. I’d have liked to hear how the pubs were also hives of political resistance and activism during the years of English rule. Or hear more about the pub’s relationship with that other institution of Irish life, the Catholic Church. Alcoholism and oppressive religion and economic despair are also a huge part of Irish history, and the pub could be a divisive as well as a unifying force.

That being said, I’d be lying if I said I didn’t enjoy this film a lot. To hear the sort of stories told in darkened pubs in a variety of charming brogues would put a smile on anyone’s face. And you’ll meet a whole cast of charming characters, from Athy to Ballylongford, from Clonakilty to Dingle, and beyond.

Lately, I’ve been watching a reality television show called Bar Rescue, in which a brash consultant tries to “turn around” failing bars in a few days. Often he berates bar owners for not changing their decor, or not upselling customers to more expensive drinks. This film, and its namesake the traditional Irish pub, is just about the complete opposite of the new ideal for bars and pubs. But I’d argue that it’s what the Irish call “the craic” that people are looking for when they walk into a bar. This film gives that difficult to define term a bit more substance, and makes for a healthy corrective to the relentless cynicism of reality TV.

This entry was posted in Documentaries and tagged ireland. Bookmark the permalink.