Posted on August 29, 2012 by James McNally
If you love short film, I’ll remind you that my next Shorts That Are Not Pants screening will be held on Thursday October 11th at the Carlton Cinemas. Advance tickets are on sale already.

One of the more unique aspects of the Toronto International Film Festival is that its shorts programme is all-Canadian. And it’s a great showcase for young Canadian talent. Some of these filmmakers may go on to make features, but as a lover of the short film format, I urge you to appreciate these films for what they are, tiny stories that can only be told in this way.

I’ve been able to watch a good selection from this year’s six programmes and my notes follow:

Lingo uses a static camera and long shots to sort-of tell the story of a young Afghan boy who inadvertently starts a fire that burns down a neighbour’s house. A misunderstanding lands his non-English-speaking mother an uncomfortable interview with a police interpreter. I want to applaud the daring of the filmmaker, because some of the techniques used are pretty alienating to the audience, but the end result communicates a real sense of confusion and disconnection, even when someone is supposedly speaking your language. 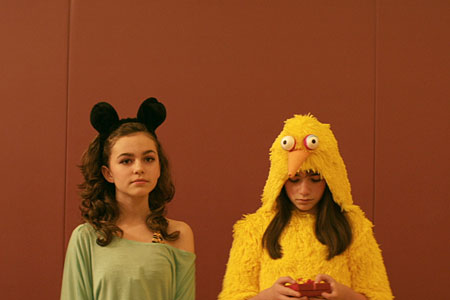 Co-director Lewis Bennett revisits an incident from Grade 5, when after a schoolyard fight, his principal warned him to change his ways or he’d “end up in an Asian gang.” Years later, Bennett, as Caucasian as ever, tries to figure out the meaning of the warning. This type of non-fiction “storytelling” short film is very difficult to pull off, and Bennett struggles with the tone, veering from out and out humour to almost public service announcement territory. Re-enacting the fight with his actual opponent is inspired, but talking to a youth worker and a former police officer about gangs bursts the bubble a bit.

A young Artic hunter sets out on her own to provide food for her family, but when she goes beyond a boundary, she finds herself in a post-apocalyptic city where everything is unfamiliar. Does food come in packages? Is the whirring and buzzing creature she meets predator or prey? Some very slick visual effects, but this felt somewhat light on story and characterization. That being said, I would welcome a longer version and perhaps a grittier visual style where the artic landscape doesn’t look so much like a well-lit soundstage.

While I thought Ashley McKenzie’s last short film, Rhonda’s Party, was well-made, I found the story sentimental and slight. Finally directing her own script, McKenzie has made a very different film. Jessie is pregnant and lives joylessly with Lee in a run-down, rodent-infested apartment. The pregnancy is the thinnest thread keeping them together, and when a rat becomes caught in a trap, there’s a power struggle to see who will “take care of it.” Despite the grim subject matter, I found this quite powerful and I liked the rather horrifying shots of rats scuttling around at night. It’s a powerful image of the darkness that the couple can’t seem to face in the daylight.

When You Sleep plays in Short Cuts Canada Programme 4

The casting of Julian Richings (Hard Core Logo) led me to believe that this tale of a man searching for a VCR to play an old VHS tape would be much darker. Instead, the humour of technological obsolescence isn’t really enough to sustain it and the mawkish ending didn’t really work for me, either. But it’s well-made and it is a refreshing change to see Richings with a smile on his face, even if it is somewhat bittersweet.

Pitch perfect casting and just the right amount of sympathy for its cantankerous main character make this one a winner. Hrant Alianak (Pontypool) plays Hector, the owner of a used-appliance store who’s used to a certain amount of solitude. When a seemingly unending stream of tween girls enter his shop in search of a clue for their scavenger hunt, it leads to a hilarious clash of generations and personalities. 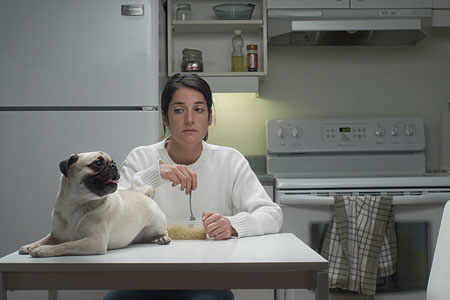 In this comedy, the humour is dark indeed. When Clara’s spinster aunt dies suddenly, her family suggest she take in the older woman’s pug, since, as a single woman herself, she has time to take care of it. When even the dog seems to boss her around, she turns to a dog trainer for help. In a hilarious sendup of “The Dog Whisperer,” he encourages her to be more assertive. It’s a lesson she takes to her pushy family members. Ève Duranceau plays the put-upon Clara to neurotic perfection, and the pug turns in a pretty impressive performance, too.

This entry was posted in Film Festivals, Shorts, TIFF and tagged #tiff12, canada. Bookmark the permalink.