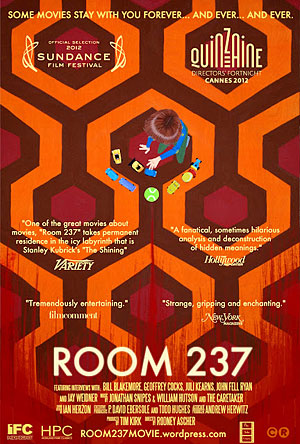 Room 237 screens as part of the Vanguard programme. Check the festival web site for screening times and locations.

Room 237 (Director: Rodney Ascher): I’ll start with a confession. I hadn’t actually watched Stanley Kubrick’s 1980 film The Shining until about two years ago. There were lots of reasons, the main of which was that I was never a real fan of “horror” films. After seeing it, of course, I discovered that The Shining is not the slasher film that I’d anticipated (and feared). Instead, it’s a dense and moody psychological thriller, and the type of film that I actually love. That being said, I may have only seen the film twice in my life.

Which makes me completely different from the motley band of nutjobs and conspiracy theorists who populate Rodney Ascher’s creepy Room 237, each of whom has probably watched the film in slo-mo dozens of times. From the man with the relatively mild theory that the film is really all about the extermination of America’s indigenous population to the guy who’s convinced that The Shining is Kubrick’s cryptic confession to filming the faked Apollo moon landings in a studio, Ascher’s “subjective documentary” turns out be at least as scary as watching Kubrick’s film itself.

Ascher wisely chooses to allow his “theorists” to only be heard in voiceover and never seen. Instead, he uses visuals from The Shining and many other films, including almost all of Kubrick’s other work. The result is deeply unsettling, especially when combined with a rather sinister score. While the various theories can often provoke guffaws of disbelief, the relentless accounting of the film’s eccentricities has an alienating effect that reinforces how weird The Shining really is.

For instance, while not convinced by one of the commentator’s convoluted geography of the hotel’s floor plan, I did become convinced that Kubrick may have purposely messed with the audience’s spatial awareness simply to heighten our sense of unease.

What Ascher’s film demonstrates most ably is the limits of auteur theory when taken to its absolute irrational end. Each of these people is convinced that not only was Kubrick aware of every tiny detail they tease out of the film, but that he alone was the visionary behind each choice. I’m aware that Kubrick may have been a bit of a control freak, but I’d be very surprised if every decision of the cinematographer, editor, production designer and even the actors sprung from the mind of the director.

In the end, while we may come out of Room 237 laughing at these “crackpots,” I’m convinced that for many of us, our next viewing of The Shining will be a lot more terrifying.

As a bonus, I’m embedding another short “narrative documentary” by the same director, “the shocking, true story of the most terrifying logo of all time.”