GLOW: The Story of the Gorgeous Ladies of Wrestling 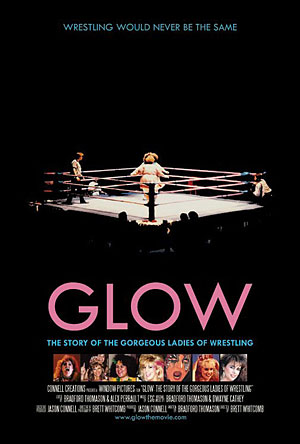 GLOW: The Story of the Gorgeous Ladies of Wrestling (Director: Brett Whitcomb): GLOW tells the story of the characters and inner workings of the Gorgeous Ladies Of Wrestling (GLOW), a syndicated television program that aired in North America from 1986 until 1990. Like the WWF, the all-female wrestling organization peddled entertainment over actual credible sporting competition, combining predetermined matches with musical interludes, reality television segments, and cornball skits (“Hee Haw with wrestling”, as former GLOW wrestler “Godiva” described it at the post-screening Q&A). I’m a child of the ’80s who grew up regularly watching the WWF, yet I’d never heard of GLOW; my best friend, who was a bigger wrestling geek than I was, told me that he’d also never heard of the program. Perhaps GLOW just had a lower profile in Canada. Regardless, millions of others were apparently watching, although I still found myself feeling at odds with director Brett Whitcomb’s generously elevated status of the Las Vegas-based show’s cultural impact.

Whitcomb delivers an informative background of GLOW for the uninitiated through an extensive number of interviews with former wrestlers who adopted flamboyant personas, assuming either hero or villain roles. To name just a few, there was the American-hating Russian “Ninotchka,” the 6’4 and 300 pound “Matilda The Hun,” “Sally The Farmer’s Daughter,” “Mt. Fiji,” and “Big Bad Mama.” Just about all of the women interviewed come across as quite likeable and their stories make for engaging viewing, whether recalling the surreal experiences of virtually overnight minor fame, being strongly encouraged to maintain their characters’ personas around the clock, their sisterly bond, the physical rigours, and their profound disappointment when the show unexpectedly ended. Unfortunately, there’s no perspective available from GLOW creators David McLane or Matt Cimber – they declined to be interviewed by Whitcomb, to the film’s detriment (Cimber does appear briefly on camera at the film’s end). The wealth of archival clips are a fun nostalgia trip back to garish day-glo colours, ridiculously huge hair styles, and some of the worst rapping you’ve ever heard (that the rap performances were inspired by the “Super Bowl Shuffle” says all you need to know), along with skimpy outfits, ultra-campy comedy, and poorly wrestled matches. There’s also some seat-squirming footage of one of the wrestlers suffering an absolutely horrific arm injury.

I do wish Whitcomb had dug a little deeper into some of the uncomfortable racial stereotypes and imagery that are demonstrated in a couple of the GLOW clips. In one quick scene, we see the “Big Bad Mama” character, which is little more than a borderline offensive “big and loud” black caricature, in the ring with two other people wearing crude white masks that I assume were a Klan reference, while another scene depicts a group of villains in Nazi-like attire and delivering a familiar salute. I understand that the show was about as low-brow as entertainment gets and that the mid-to-late 80s were a less PC era, but the fact that these scenes are shown within about a minute of a reference to GLOW being wholesome, family entertainment begs further exploration.

Where the film really excels is toward the end, leading up to a reunion involving many of the former wrestlers. Most of them haven’t been in contact with each other since the show went off the air and the women, who almost unanimously look back on their GLOW experiences fondly, touchingly reconnect with old friends and co-workers with whom they share a unique bond. The documentary resonates strongest emotionally, however, during the portions featuring Emily Dole, who played the “Mt. Fiji” character. Now confined to a nursing home due to diabetes and severe knee problems exacerbated by her excessive weight, Dole appears to have been hardest hit by GLOW’s abrupt cancellation. Clearly, she feels like her years on the show, during which she was one of its most popular characters, were the best of her life. I won’t give too much away – suffice it to say, there are some scenes at the film’s end with her that are sure to tug at the viewer’s heart.