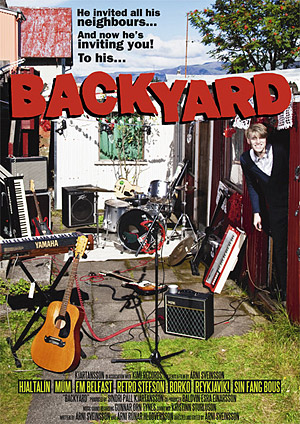 Backyard (Director: Árni Sveinsson): While it’s true that I’ve long been a fan of Icelandic cinema, I have been a fan of Icelandic music for even longer. In the late 1980s, a band called The Sugarcubes and their elfin singer Björk introduced me to the unique sounds of this tiny country, and since then, I’ve come to love dozens of bands from Iceland. Someone in another recent documentary about Iceland’s seemingly boundless creativity said that the fear of failure is almost nonexistent, so people take risks. They also help each other out, which is exactly how Backyard came to be.

Each August the city of Reykjavik celebrates Menningarnótt (Reykjavik Culture Night), a daylong celebration of the creative spirit of its citizens. There are all kinds of official and unofficial events, and in 2009, Árni Rúnar Hlöðversson (of FM Belfast) decided to hold a concert in his backyard and invite his friends to play. He wanted to record the audio, but he also invited his friend Árni Sveinsson to shoot video. None of the bands (or even the two Árnis) thought they were making a “real” movie, so the whole thing is incredibly loose. Based on my own experiences in Iceland, most things organized are “incredibly loose.” Icelanders like to fly by the seat of their pants, to be honest, but it gives the film a real energy, too.

Though we get the background around the planning (which seems to happen in a matter of days), the majority of the film’s brisk 73-minute running time is given over to the performances, and what a treat. The lineup is incredibly diverse, from the lo-fi stylings of Borko and Sin Fang Bous to the raucous assault of Reykjavik! to the feel-good party sounds of Retro Stefson and FM Belfast (whose finale “Underwear” is guaranteed have you bouncing around your living room grinning like an idiot). And though the musical styles change, it’s great to see how many bands actually share members. In a small place like Iceland, this might be a necessity but it also allows for some very interesting musical cross-pollination. It’s fitting that the film ends with many of the musicians soaking together in one of Reykjavik’s thermal swimming pools.

Some of these bands (múm, Hjaltalín) were known to me, but most were new discoveries, and luckily the DVD package (buy it here!) comes with an audio CD of the songs as well. It’s been on constant rotation over the past few months for me, reinforcing my sincere belief that Iceland is pound-for-pound the most creative place on the planet.

This entry was posted in Documentaries, DVD and tagged iceland, music. Bookmark the permalink.