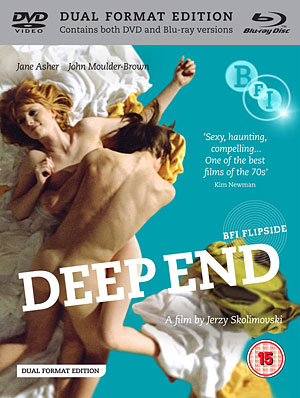 BFI Flipside released Deep End in a combo DVD/Blu-ray package in the UK on July 18, 2011. The region-free package is available from Amazon.co.uk.

Deep End (Director: Jerzy Skolimowski): Somewhat condemned to arthouse obscurity after its 1970 release, Skolimowski’s first film in English (prior to this he was best-known as the co-writer, with Roman Polanski, of Knife in the Water) is a fascinating time capsule of a period between the hope and energy of the 1960s and the rather more dark decade to come. A stylish exercise from a director who has at various times in his life worked as a poet and painter, its narrative of adolescent obsession ends up being far more visually impressive than psychologically convincing.

Fifteen-year-old Mike (John Moulder-Brown) drops out of school and takes a job as an attendant at a slightly seedy public bathhouse in London. Almost immediately he is smitten by his spunky and streetwise colleague. Flame-haired Susan (Jane Asher) is in her early 20s and engaged, but not in any particular hurry to get to the altar. In fact, she’s carrying on an affair with one of Mike’s former teachers, a married man who gropes and manhandles his female students at will.

Mike is immediately jealous of both of the other men, and carries out childish acts of sabotage when he’s not stomping off in a sulk. Susan’s behaviour doesn’t help, since her flirtation often has a cruel edge. She seems to enjoy drawing him close and then pushing him away. Meanwhile, at the baths, she instructs Mike to accept tips from the female customers for any “extra services” he can provide. We’re never quite sure that she isn’t doing the same for the men, and when, during a surreal night in Soho, Mike seems to learn that his crush might also be working as a stripper, it pushes him closer and closer to the edge of acceptable behaviour. It’s a line that we know is definitely going to be crossed by the end.

BFI’s restoration of the film is remarkable, and since most of the film’s appeal is visual, it makes for a stunning presentation, especially on Blu-ray. Also enlightening is a feature-length (74 minutes) documentary on the making of the film, with input from Skolimowski, Asher, Moulder-Brown and many others. There’s also a short film starring Asher exploring obsession from a female perspective, as well as another short documentary about scenes which weren’t included in the film. Finally, a substantial booklet is included with essays from David Thompson, Yvonne Tasker and Skolimowski expert Ewa Mazierska.

While I appreciated the film’s daring visuals and the theme of adolescent sexual obsession, I found the script weak and the performances uneven. In a few places (particularly one scene with former blonde bombshell Diana Dors), the film played like a classic British sex farce in the manner of the Carry On films, making its third act turn into darker territory somewhat jarring. But the leads are beautiful to look at, as is London (even though much of the film was actually shot in Munich!) and the soundtrack (with songs by Cat Stevens and Can) evokes a time and place that perfectly suits our protagonist’s tragic loss of innocence.

This entry was posted in DVD and tagged 1970, adolescence, obsession, uk. Bookmark the permalink.