I’ve just returned from my third annual trip to the Festival des films du monde in Montréal, a city I appreciate more each time I visit. I was there for five days, and saw 9 films during my time there. This year, I opted to stay right in the Quartier Latin neighbourhood where most of the films are screened. The Hotel Quartier Latin was basic, but clean and relatively quiet, despite being right next door to a “gentlemen’s club.” More importantly, it was convenient not only to the cinemas (150 metres away!) but to the bus station (about 400 metres), Metro (subway) station (250 metres) and to a host of fine drinking establishments. I enjoyed the microbrews at Le Saint Bock and, especially, L’amère à boire. Both were within stumbling distance of my hotel, though for the record, there was no stumbling involved. I also got to enjoy an amazing smoked meat sandwich at Schwartz’s, though completely missed my bagel fix from Fairmount Bagels this year. 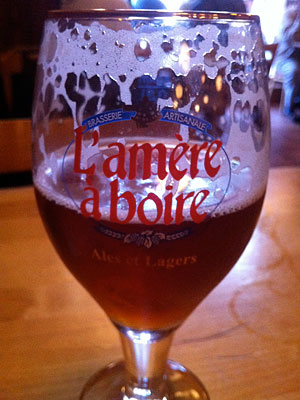 What about the films, you say? Well, just in case I don’t get to review all of them before TIFF arrives, here is a list of what I saw in order from best to worst (though nothing was truly awful):

The festival experience itself continues to be an interesting contrast to TIFF. The audiences at MWFF are much older, with the majority of attendees in their 50s or older. And I find them unsure when to applaud at the end of films and reticent during Q&A sessions, so very different from the Toronto audiences. Only one of the screenings I attended was anywhere near full (The Artist) and although I do enjoy my time at MWFF, I have a few concerns about its ongoing sustainability in a city with so many other fine film festivals. Perhaps next year, I’ll give the Festival du nouveau cinéma a try.

This entry was posted in Film Festivals, Travel and tagged #mwff11, Montréal. Bookmark the permalink.