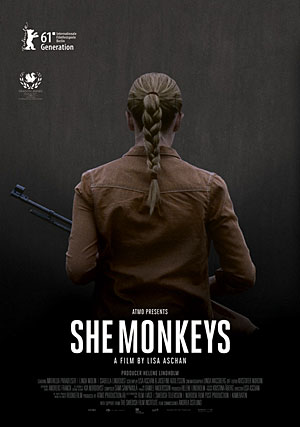 She Monkeys (Apflickorna) (Director: Lisa Aschan): We are introduced to Emma just as she is joining an equestrian gymnastics team. Even though she’s the new girl, it’s clear she’s just as competitive and strong as Cassandra, the team’s unspoken leader. It doesn’t take long for a powerful mixture of competitiveness and sexual attraction to bring the two young women together, and for the rest of the film, we’re never sure if the sparks are going to throw them into a passionate love affair or drive them apart as hated rivals.

At home, Emma lives with her father and her young sister Sara. It’s significant that there is no mother in the home, because Emma has clearly filled the female power vacuum there. Young Sara is keenly aware of her own powerlessness and begins acting out in an effort to change that. After being humiliated at the swimming pool for not wearing a top, her acting out becomes overtly sexual. Her clumsy sexual advances on her much older cousin Sebastian are creepy and endearing at the same time.

Meanwhile, Emma and Cassandra are falling in love. When Emma flirts with a boy, Cassandra humiliates him, and strangely, Emma joins in. But when Cassandra tries to take their relationship too far, Emma hesitates. Cassandra has sparked a sexual awakening (and a dreaded loss of control) in her that she never wanted. Her conflicted feelings only intensify when, despite her strength and balance, she fails to make the team. The line between love and hate can be pretty thin, and a desperate act of jealousy leads to an ambiguous conclusion.

I loved the fact that the male characters in the film are all at the mercy of these powerful women, but that the women are unsure of how to use their power. The young actors playing Emma (Mathilda Paradeiser) and Cassandra (Linda Molin) are both good, but it’s Isabella Lindquist as Sara who is a standout, holding up her important subplot ably as a child clutching at the power of her sexuality far too early.

The balance of power, between who is in control and who is being controlled, shifts so often and so subtly that this is a film that will require repeated viewings to tease out all the layers. Overall, She Monkeys is a nuanced examination of female power and a fine feature debut.

This entry was posted in Film Festivals and tagged #mwff11, adolescence, sweden. Bookmark the permalink.