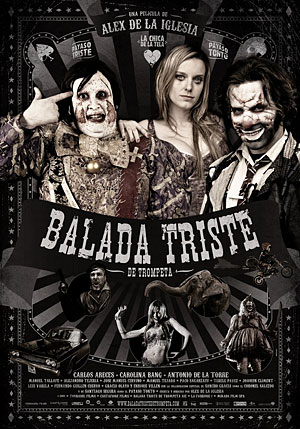 Balada Triste (The Last Circus) (Director: Álex de la Iglesia): Though I haven’t seen everything he’s made, I’ve been a big fan of Álex de la Iglesia since I saw his brilliant Crimen Ferpecto (review) at TIFF way back in 2004. The man has a gift for satirizing the rich and powerful. His first film, the criminally hard-to-find Accion Mutante, was set in a future world ruled by the beautiful where a gang of mutants and outcasts kidnap the daughter of a powerful businessman to demand more rights for ugly people. So I was very excited to see what he would do with the still-somewhat-taboo subject (at least in Spain) of the Spanish Civil War and life under the dictatorship of Franco. I was not disappointed.

The film begins in 1937, as the Spanish Republic is rapidly crumbling under the advance of Franco’s army. Republican forces compel a troupe of circus performers to join them in repelling an attack and in the ensuing battle, a machete-wielding clown cuts down dozens of fascists. Sent to a labour camp, he tells his teenaged son that he must follow in his footsteps, but that he will be a sad clown. The only way the young man will experience love, the father says, is by exacting revenge. When son takes up his father’s challenge by bombing the work camp, it leads to his father’s death and a confrontation with a sadistic Colonel which leaves the commander blind in one eye and eager for his own revenge.

Fast forward to 1973, and young Javier is now a chubby middle-aged nebbish about to begin a job as the sad clown with a ragtag circus troupe under the sadistic control of Sergio, the “happy clown.” Sergio tells Javier that if he wasn’t in the circus making children happy, he’d be a murderer, and it doesn’t take long for him to display the truth of that admission. At a post-show dinner, he tells a joke in extremely poor taste, and Javier is the only one who doesn’t laugh uproariously. Then Sergio punches his girlfriend, lovely trapeze artist Natalia, right in the face and leaves her lying unconscious while the group continue to listen to his funny stories. When they leave, Javier comes to her aid and is immediately smitten. As the days go on, Natalia flirts with and confides in Javier, and Sergio’s jealousy reaches insane heights. In their act together, Sergio takes it out on Javier, leaving him bruised and humiliated. When he catches Natalia and Javier on a date at a fun fair, he goes crazy and beats Javier almost to death.

From his hospital bed, Javier vows revenge and soon returns to exact it. Seething with rage after he finds Sergio and Natalia having sex, he attacks his rival with knives, leaving his face badly disfigured before running off into the night. When the troupe can find only the local veterinarian to repair the damage to Sergio’s face, he’s left looking more like a monster than a clown. Meanwhile, Javier is living in the forest like an animal, naked and eating raw meat, still senseless with anger. After Sergio also disappears, the circus has to close up shop.

But our two rivals are still intent on winning Natalia’s heart and there will be even more Grand Guignol spectacles of violent retribution to come, including self-mutilation, a humiliating encounter with Franco, a memorable reunion for Javier and the Colonel, and a Hitchcock-inspired chase across the giant cross at the Valley of the Fallen.

It’s boldly operatic filmmaking, and the added weight of metaphor makes it even stronger. Two clowns fighting over the same woman represent, for de la Iglesia, two sides fighting over the same country. While his sympathies are with the Republicans, he clearly shows how war transformed the rational into the irrational until both sides resembled the same type of monster. In the end, the entire country suffered. Jealousy, possessiveness, ego and a bloodthirsty desire for revenge have left deep scars on the country both sides claimed to love, and Balada Triste turns up the violence and the cartoonishly insane behaviour of the lovers to heighten the effect. The end result is outrageously entertaining and sobering at the same time. As with his previous films, de la Iglesia hides his angry fist inside a humourous glove, but he still hits very hard. This is definitely a film that will reward repeat viewings. At the first viewing, it will be hard to be anything other than dazzled; he’s not a subtle filmmaker. But I think there is much more here than just homicidal clowns.

Official blog of the film (Espanol)

Here is the Q&A with director Álex de la Iglesia from after the screening. As always, he’s wildly entertaining, having just enough English to endear him to the audience.

I couldn’t find a trailer yet for the film, but here is the song by Raphael that is the inspiration for the title. This footage is actually used in an important way in the film, too.

This entry was posted in Film Festivals, TIFF and tagged #tiff10, spain, spanishcivilwar. Bookmark the permalink.