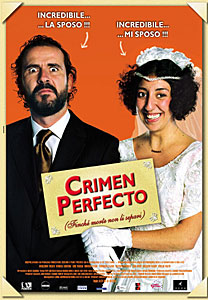 Ferpect Crime (Crimen Ferpecto) (Spain, director Álex de la Iglesia): I knew I was going to enjoy this film from the moment a large rumpled man in a Misfits t-shirt lumbered onto the stage to introduce himself. “Hola, amigos. The person who is supposed to introduce me is not here. I am here but she is not here. She is in the bathroom.” Director Álex de la Iglesia had us laughing even before the first frame of his film. While admitting that Ferpect Crime was just about the worst title for a film ever, he told us that this film was about a man who was so obsessed with living a perfect life that it was bound to cause problems. It’s no surprise to learn that the director has a degree in philosophy.

Rafael works as a salesman in the ladies’ wear section of an upscale department store. He’s very popular at work, especially with the ladies, and he’s very very good at his job. So good, in fact, that he considers himself a lock for the position of floor manager. But after losing the promotion to his hated rival Don Antonio, things take a turn for the worse and pretty soon Rafael has a dead body on his hands. His only help comes from the one woman he hasn’t already bedded, the unattractive Lourdes. Before long, Lourdes has Rafael wrapped around her finger and his life is far from the model of perfection he has always pursued. As the plot thickens, the comedy becomes much darker and the film almost turns into a thriller. There is also a strong element of satire, making this much more substantial than the laughs would indicate. The conclusion (”lesson” seems too strong a word here) is that it’s only after we give up our unrealistic expectations of living a perfect life that we can really begin to live at all. But if that’s too heavy for you, then go just to see the scene where Rafael goes to meet Lourdes’ parents. This film makes me want to see every other film by this warm and wickedly funny director.

This entry was posted in Film Festivals, TIFF and tagged spain. Bookmark the permalink.