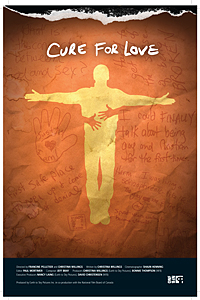 Cure for Love (Directors: Francine Pelletier and Christina Willings): I first heard about this documentary almost a year ago, and excitedly wrote to the filmmakers asking for a copy. To my shame, I’ve had that copy for almost eight months and am only now getting around to it. Although it was an inquisitive email from one of the directors that jolted me into action, I’m happy that my review also coincides with the end of the Inside Out fest, which I’ve just been too busy to cover, despite my best intentions.

Cure for Love begins cryptically with a wedding ceremony between a self-described gay man and his lesbian friend. Brian and Ana originally met online through the Living Hope Youth Forum, a bulletin board for evangelical young people struggling with same-sex attraction. In general, the evangelical subculture frowns upon homosexuality and considers its expression a sin. Many ministries have cropped up to help people to curb their desires and Living Hope is just one example of these so-called “ex-gay” ministries. This film introduces us to Brian and Ana, as well as to two other friends who met through Living Hope. John and Darren end up taking a different journey than their friends, each embracing their sexuality while attempting to hang onto their faith. This film very sensitively listens to its subjects as they describe their pain and their efforts at resolving the very real conflicts within themselves.

John’s story is maybe the most affecting for me. This incredibly intelligent and articulate man describes how in high school he would cut phrases like “not man enough” and “I hate me” into his arms with knives in order to fend off more serious thoughts of suicide. He describes being put on anti-psychotic medication and seeking help from various “ex-gay” ministries such as Living Hope and Exodus. He finally comes to the conclusion that there must be something wrong with a set of religious beliefs that in the end led him to try to destroy himself. Even so, he carefully examines biblical and theological evidence to help him accept who he is and to enjoy a romantic relationship with another man.

Darren also becomes uncomfortable with the teaching of groups like Exodus. In their founders’ stories of anonymous sex and rampant promiscuity, Darren fails to find anything resembling his own story. He admits that he never even kissed a man until he was 27, and that instead of feeling dirty, he felt incredibly free. It’s painful to watch him recount how he had to pull back from a relationship with a man he clearly loves because that man had not yet been able to accept his own homosexuality.

Brian and Ana are perhaps the most enigmatic. Ana seems unhappy but resigned to a marriage she describes as “like having a roommate for life.” Her unyielding view of what she thinks the Bible teaches about homosexuality will not let her change her mind, even as she and Brian visit with their old friend John and his new boyfriend Chris. Brian seems to be making the best of it. His “successful” marriage has given him new opportunities to speak at churches and “ex-gay” ministry conferences and he seems to enjoy these rewards enough to stop short of where John and Darren have gone. Maybe the prestige and sense of community he enjoys is enough to sublimate his desire for a real romantic and sexual relationship. It’s Ana for whom I feel the most, since she’s not enjoying the same sense of reward or fulfillment.

Although directors Willings and Pelletier do occasionally bring in representatives of some “ex-gay” and “ex-ex-gay” groups, I appreciated that they kept the focus very tightly on this small group of friends. Because they’re friends who have reached different conclusions, their attempts to remain close project a sense of discomfort that makes you hurt for everyone involved. Cure for Love takes a very sensitive approach to a complex intersection of subcultures, and succeeds in showing its subjects as real human beings.

It will be showing at the Frameline San Francisco International LGBT Film Festival on June 20 and at Vancouver’s Queer Film Festival in August, but this is the sort of documentary that really needs a television broadcast or some other way to reach a much wider audience. I sincerely hope it gets that opportunity.

This entry was posted in Documentaries and tagged christianity, faith, homosexuality, religion. Bookmark the permalink.