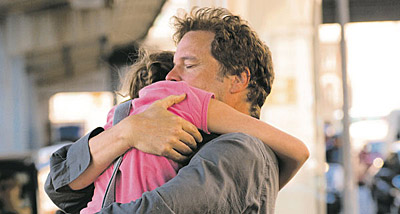 Genova (2008, Director: Michael Winterbottom): Genova is a psychological drama about a father (Colin Firth) and his two daughters Perla Haney-Jardine and Willa Holland) who struggle with the tragic loss of their mother (Hope Davis). Firth’s character thinks that a change of scenery will help the family to get through their bereavement and takes a teaching position in Genova.

Catherine Keener plays an old friend of Firth’s who shows the family around the city. The new surroundings serve as a distraction for the family but it also casts them further into an abyss of unsettling change. The narrow alleys in Genova make it easy to get lost and Winterbottom uses this setting to create tension.

The acting is first rate. Firth is perfectly cast as a husband and father who ventures alone into unknown territory — new city, new job, raising a teenage daughter who is coming of age and dealing with a 10-year-old daughter who blames herself for her mother’s death.

Perla Haney-Jardine provides a stand-out performance as a child who has frequent nightmares and is haunted by her mother.

Winterbottom’s Genova has been described as a mood piece but I wasn’t in the mood for this art-house film. I didn’t feel that Genova measured up to all of the praise that was lavished on it by TIFF’s Cameron Bailey. It’s a fine film with great performances but in the end I was disappointed. I suppose I wanted to see more of Italy and a little less grief.