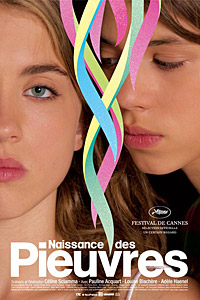 Water Lilies (Naissance des Pieuvres) (2007, Director: Céline Sciamma): I originally wrote about this film way back in August 2007, anticipating its screening at TIFF. For some reason, I wasn’t able to see it then, so when I saw it in the Cinéfranco lineup, I vowed not to miss it again. And I’m so glad that I didn’t. Céline Sciamma’s directorial debut is a deeply affecting and beautiful film about adolescence: body image, hormones, self-esteem, friendship, loyalty, crushes, sexual confusion, conformity. Though it’s never “about” any of these, it says a lot about them. But it’s not a film of grand gestures. Instead, it’s a very small, very personal film that resonates well beyond its seemingly narrow scope.

It’s summer in an unnamed French suburb. Skinny undeveloped tomboy Marie (Pauline Acquart) goes to the local pool to see her chubby friend Anne (Louise Blachère) perform in a synchronized swimming event. While there, she is mesmerized by the captain of the team, gorgeous blonde Floriane (Adele Haenel). She develops a major crush that becomes an obsession, and abandons Anne to pursue Floriane. Insinuating herself into Floriane’s life by doing favours, she is soon able to watch the team practice and even travel to performances with them. Though it’s obvious that Marie has romantic feelings for Floriane, she is unable to say anything for fear of rejection. Instead, she lets Floriane use her to sneak out of the house to meet boys, causing Marie no end of anguish. Meanwhile, Anne has fallen hard for one of the boys on the water polo team, even though he’s desperately trying to bed Floriane himself. Floriane is just enough of a cypher to cause heartache everywhere she goes, using her flirtatiousness as a defence mechanism to hide her own sexual confusion and fear. Though this leaves Marie confused and heartbroken, she displays a core of toughness that will carry her through. Her friendship with Anne is also deeper than it first appears, and the two outsiders by the end seem much stronger than the supposed “normal” pretty girl.

The setting among a team of synchronized swimmers is a stroke of genius. Back in the fall, I read a few reviews of the film, and I can’t remember where I read it, but I’m stealing the idea nonetheless. A critic stated that synchronized swimming was the perfect metaphor for adolescence. Smiling and beautiful on the surface, but under the water, legs churning like mad to stay afloat. I also liked the idea that, like gymnasts or ballet dancers, there is one particular body type that is required, and anyone else is rejected. The hair and makeup also make the swimmers indistinguishable, since they are all expected to function as part of a greater entity, almost mechanical in its precision. It’s obvious that Marie and Anne don’t fit into this world, but they are magnetically drawn to it anyway. The absence of any adults or any specifics that would place the story into a particular time help to reinforce the insularity of this time in their lives, and therefore its intensity.

As I said in my preview, the film reminded me a lot of Lukas Moodysson’s Show Me Love (1998), and there is even a physical resemblance between the two female pairings. Just as in that film, the director handles the delicacy of first love with great sensitivity, and focuses on how the tiniest of actions or gestures can have great significance. Sciamma coaxes incredibly brave performances from her three young actors, and the cinematography reinforces how beauty is intensified by vulnerability. Though it’s a hoary old cliché, since this is a first film, there is most definitely a lot of Céline Sciamma’s own experience on the screen. I’m desperately hoping she has a lot more to say.