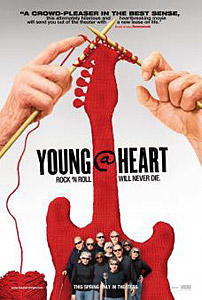 Editor’s Note: Doc Soup is a monthly documentary screening programme run by the good folks at Hot Docs. It gives audiences in Toronto (and now Calgary and Vancouver!) their regular doc fix each year from the fall through to the spring, leading up to the Hot Docs festival itself.
Editor’s Note: The following review contains what some may consider a SPOILER. To avoid affecting the filmgoing experience for you, gentle reader, I’ve applied white text colouring to the spoiler section. If you want to read it, just click and drag your mouse over the blank area. For those reading the RSS feed, you’ll just have to avoid reading this entry before you’ve seen the film.

[email protected] (2007, Director: Stephen Walker): It would be almost impossible to make a bad film about the [email protected] Chorus, a group of senior citizens in Northampton, Massachusetts whose repertoire includes songs by The Ramones, The Clash, Coldplay and Sonic Youth. Stephen Walker’s film is a genuine crowd-pleaser, with scenes of great emotional intensity and some unforgettable characters, and was a great choice to close out this season of Doc Soup. When musical director Bob Cilman began working with the group in 1982, their repertoire was mostly vaudeville stuff, but over the years he’s added more and more contemporary music. Though choir members aren’t often familiar with the songs and in many cases, don’t even like them, by the time they’ve learned them, they end up bringing something unique to their interpretations. One of the clever touches of Walker’s film is the insertion of several “videos” shot for songs like the Ramones’ “I Wanna Be Sedated” and the Bee Gees’ “Stayin’ Alive.”

Apart from the videos (shot at Cilman’s insistence because he said he never saw old people in music videos), the rest of the film follows a tried-and-true format, following the choir through several weeks of rehearsals before a new show. We get to see the process of learning new material, and it often goes hilariously wrong. Some of the choir members are a bit deaf, or need large-print versions of the lyric sheets. Others can’t figure out how to play compact discs. And some just don’t seem very musical at all. But as Walker’s camera follows them around, we get to know them, and we realize how much this creative outlet means to them.

One of Cilman’s initiatives for the new show is to bring back two members who’d recently had to stop performing due to health problems and have them sing a duet of the Coldplay song “Fix You.” But things take an unexpected (or perhaps only a half-expected) turn when one of them dies, and by the time Fred Knittle sits down on a chair holding his oxygen tank to sing it alone, the lump in my throat was growing. Though his voice is strong and the rendition beautiful, it was the off-kilter beat provided by the oxygen machine that made the song so heartbreaking. That and the lyrics:

And the tears come streaming down your face
When you lose something you can’t replace
When you love someone but it goes to waste
Could it be worse?

Mortality is the one thing that none of us can “fix” and I’m glad the film reminded us of that. This is something that senior citizens face every day, as they watch their friends and loved ones pass on around them, and wonder when their time will come. Their courage and acceptance in the face of such tragedy, their determination to live every moment, and their simple joy in performing were inspiring and infectious.

If I have any complaints about the film, they have nothing to do with the story. But I did feel that Walker was a little too present in the film, from his intrusive narration to his insistence on talking off-camera to his on-camera subjects. I really enjoyed meeting these fascinating people and watching how the show is produced and rehearsed, but I didn’t enjoy hearing so much about Stephen Walker, though I’m sure he’s a nice chap.

Here is the Q&A with director Stephen Walker along with Bob Cilman and some of the choir members from after the screening: