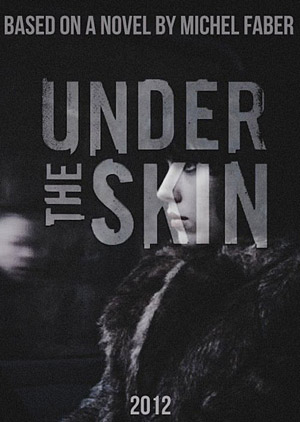 Editor’s Note: The poster image used here is not final or official (as evidenced by the incorrect release date on the bottom) but it’s better than the book cover I was going to use.

Under the Skin (Director: Jonathan Glazer): In Michel Faber’s 2000 novel Under the Skin, a mysterious woman drives around rural Scotland, picking up hitchhikers for mysterious reasons. Faber’s first-person prose leads us to believe her motive is purely one of sexual hunger, and when the very outré ulterior one is revealed (she’s an alien in human form, looking for flesh to harvest), we see how weirdly kindred the two processes are.

Jonathan Glazer’s long-gestating and boldly abstract adaptation of Faber’s novel stays faithful to only a few broad plot details – her mission also involves finding men, preferably loners, and luring back to her abode for initially unspecified reasons. But more crucially, it takes that quality of making the commonplace strange and amplifies it tenfold. Like the best genre narratives, Under the Skin works on an anti-naturalistic register, and uses uncanny, iconographic imagery to grapple with themes and emotional terrain that makes psychological realism seem ill-equipped for; chief among them being loneliness, displacement, and the mutability of desire.

The alien is here made nameless, and rather than the scarred, awkward thing of Faber’s novel, she’s played by Scarlett Johansson, fetchingly but also amusingly dressed in a fur coat and skintight jeans; an appropriately alien approximation of attractiveness. The film makes canny use of Johansson’s default setting for the most part – she’s a hypnotic blank – but there’s also a real sense of emerging, inchoate vulnerability under the facade, albeit one that never truly comes across as entirely human.

The film’s opening images are of dilating orbs, which have a Rorschach-blotch quality that portends the film to follow, and the emergence of light from darkness in this overture also intimates the alien’s journey from efficient predator to nascent humanity. The precise moment of that awakening isn’t made completely explicit. A scene in which she picks up and seduces a severely disfigured young man shows her to be oblivious and non-judgmental to his otherness (being alien has its virtues), though a glimpse of herself in a mirror, following his entrapment, seems to cast the burden of the body into sharp relief.

The influence of Stanley Kubrick is all over Under the Skin, but it goes beyond the superficial. Glazer’s previous film Birth (not to mention a number of his music videos) suggested a Kubrick heir-apparent, but occasionally in cringing fashion; particularly its shout-out to Barry Lyndon in a scene involving Danny Huston chasing and spanking Cameron Bright’s possessed child. Under the Skin gets Kubrick-like effects from less obvious means – the interplay of light reflected on faces, visors and windscreens as subjects glide through the Scottish motorways achieves the cosmic grandeur of 2001’s Stargate sequence, while Faber’s heavy-handed meat-processing allegory is condensed into an elegant montage that evokes both The Shining’s corridor-of-blood and Nikolas Geyrhalter’s Our Daily Bread.

But more significantly than just absorbing the influence, Glazer reveals himself, unlike his master, willing to open a window and let reality infringe upon his meticulous, visionary construction. The film’s most intriguing but problematic conceit involves Johansson, barely recognizable in a dark bob, followed by hidden cameras as she scours the streets for male prey in her van, her victims both unwitting participants in the film and integral to its diegesis. There’s a comic frisson to these interactions – she’s literally an alien placed in the real world – but Glazer rarely lets them play out as anything but a montage, and the strictly-functional deployment of documentary material feels a bit of a missed opportunity, particularly in the context of a film that looks askance at the functional.

Nonetheless, the tension between naturalism and surrealism (the seduction scenes, which seem to transpire in a realm beyond time and space, have the same suspension of the motion-capture episode from Holy Motors) gives the film a texture that’s alien indeed. Ironically, the film’s language becomes less experimental when Johansson’s extra-terrestrial begins to experiment herself, with mercy, empathy and human pleasure. If Glazer’s Sexy Beast and Birth were love stories built around acts of verbal persuasion, Under the Skin ultimately resonates as a wordless evocation of solitude, as well as an ode to nature – the mysticism of its ending feels appropriately tragic yet triumphant, and To the Wonder would be a perfect alternate title if Malick hadn’t already used it.

As pure cinema, Glazer’s film is nothing short of indelible – there are few images from it that haven’t left my head (in particular, two instances of superimposition are worthy of Murnau and Jean Epstein). That it’s also maddeningly opaque and imperfect somehow works in its favour, giving it the additional quality of being recognizably human.