Love & Terror on the Howling Plains of Nowhere 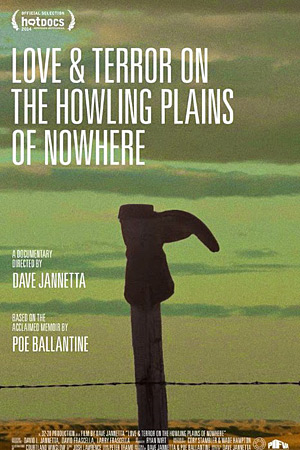 UPDATE (January 21, 2015): Happy to announce that the film will be released on iTunes and other VOD platforms on February 3, 2015. Here are links for iTunes (US) and iTunes (Canada). Check it out!

Love & Terror on the Howling Plains of Nowhere (Director: Dave Jannetta): The ingredients of Love & Terror on the Howling Plains of Nowhere sound like they’ve been plucked from a Bruce Springsteen song or a David Lynch movie, as the film delves into the mysterious death of a loner in a remote American midwest town (Chadron, Nebraska), the quirky personalities who populate it, and the eccentric writer documenting it all. Director Dave Jannetta based his film on the 2013 book of the same name from author Poe Ballantine (real name Ed Hughes), a Chadron resident.

The core of the film is formed by the 2006 death of mathematics professor Steven Haataja, who disappeared a few months after taking a job at Chadron’s local college. 95 days after last being seen, Haataja’s charred body was found tied to a tree on a nearby ranch and while the evidence seems to point to it being a homicide, too many unanswered questions result in a case that remains unsolved to this day. The murder(?) mystery, made more compelling by some shoddy police work and speculations of suicide after revelations of Haataja’s history of depression come out, fuels the intrigue of the residents of the quiet town of 5,600. A number of them weigh in with their wide-ranging theories on the case and brief remembrances of Haataja and it’s these interviews that really elevate the quality of Love & Terror…. Jannetta strikes cinematic gold here with one colourful interview subject after another. One, a former detective who worked on the investigation, surprisingly admits to being the case’s most likely suspect, while another disgustingly asserts that “If it had been a fucking football coach who disappeared, they would’ve called in the National Guard.” The third component of Love & Terror… comes from its significant time spent with Ballantine, who spent six years researching the case for his book. The writer possesses an idiosyncratic charm that fits right in with the documentary’s gallery of oddballs, and his philosophical ponderings and recollections from his life never fail to fascinate (like Haataja, Ballantine also struggled at times with severe depression). Ballantine also acts as a sort of tour guide (albeit speculatively) through Haataja’s last moments alive, helpfully retracing the likely routes the professor would have had to take to his final destination.

Although its central focus is quite dark, Jannetta and Ballantine add a surprisingly lighthearted and humorous touch to Love & Terror…, which is unlike any other documentary I’ve ever seen. The mixture of these two elements may make some viewers uncomfortable (I was a little), but the end result is a thoroughly entertaining and engrossing film that never disrespects Haataja’s memory (it should be noted that Haataja’s family declined to be interviewed for the film and was opposed to its making).