Posted on September 3, 2013 by James McNally

This year marks the 100th anniversary of the Elgin and Winter Garden Theatre Centre, and as part of the anniversary celebration, the Ontario Heritage Trust has commissioned a series of short films that use the theatres as settings, both historical and present-day. The project is called Stage to Screen, and each of the six short films will be shown during this year’s Toronto International Film Festival. One of the shorts, Danis Goulet’s Wakening will open the festival, screening before the Opening Night feature, The Fifth Estate, at the Elgin. I had a chance to watch most of the films and thought I’d let you know what I thought. In addition to their TIFF screenings, all the films will be available to watch online soon at BravoFact. 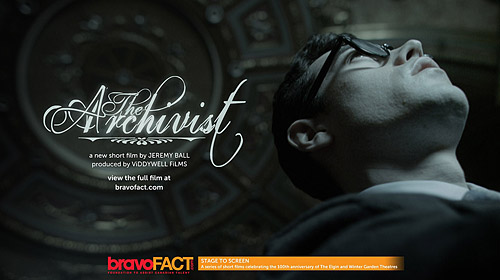 Synopsis: A young assistant projectionist investigates a series of mysterious disappearances at the cinema where he works.

My take: Unfortunately, the film wasn’t ready to view at press time.

Synopsis: Set in a time when the movie house was a place of escape and dreams, a criminal takes a break in a theatre audience.

My take: A little hard to figure out what’s going on, unless you know that in 1934, infamous bank robber John Dillinger was shot and killed by federal agents as he exited the Biograph Theater in Chicago. The original seat in which Dillinger sat is now at the Elgin Winter Garden. This film was the shortest of the six and could have used another few minutes to establish the characters a little more fully.

My take: Despite a plot device lifted directly from the Woody Allen film Purple Rose of Cairo, this one works really well, using black and white cinematography and a virtually silent soundscape to recreate a bygone era. It also uses the Elgin Winter Garden the most effectively as a character and not just a location. Despite a few anachronisms (the bars across the emergency exit doors are particularly glaring), Silent Garden mostly succeeds in immersing us in the era when projected images gained the upper hand on stage performers.

Synopsis: The young daughter of a tiny family that lives in the Winter Garden Theatre longs to dance on the big stage.

My take: Another one that wasn’t ready to see before publication time.

Synopsis: An ancient aboriginal myth told as a post-apocalyptic story, set in the Winter Garden Theatre.

My take: Although this didn’t use the theatre setting in quite the standard way, I think it’s a very strong story. Melding aboriginal folklore with a post-apocalyptic setting is original, though now I’m finding the story missing some pieces. An aboriginal hunter arrives in the theatre and encounters the Witigo/Wendigo, a monster who feeds on human flesh. The filmmaker’s notes say the hunter has come in search of the creature who can save her people, but the film never makes that clear enough, nor how exactly this beast could be controlled. Nevertheless, Wakening displays a bold voice, and perhaps a feature could fill this story out in a more satisfying way.

Synopsis: A wildly successful playwright desperately tries to renegotiate a deal he made for his success.

My take: This spin on the Faust tale is pretty lightweight. In fact the Devil/Muse figure only appears at the very end, and we never really understand the terms of the bargain. As well, the jaunty musical score makes this much less dark than it might (and in my opinion, should) have been.

This entry was posted in Film Festivals, Shorts, TIFF and tagged #tiff13. Bookmark the permalink.