Everybody Has a Plan (Todos tenemos un plan) 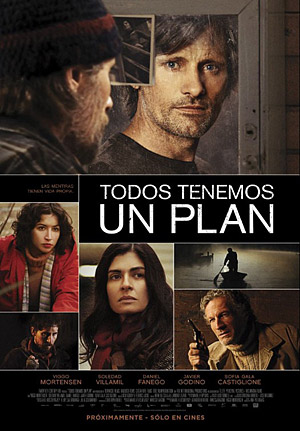 Everybody Has a Plan (Todos tenemos un plan) (Director: Ana Piterbarg): This marks the fourth Spanish-language film for Viggo Mortensen, who spent a number of years in his youth living in Argentina. His latest project finds him playing identical twin brothers in this film noir from Argentinian first-time feature director Ana Piterbarg, who also co-wrote the screenplay.

The premise: Agustín (played by Mortensen) appears to have the ideal life. He’s a pediatrician with an attractive wife (Claudia, played by Soledad Villamil) living quite comfortably in Buenos Aires. The couple’s plan to adopt a baby derails when Agustín changes his mind at the last minute, leading to a huge rift that brings to the surface the true unfulfillment that Agustín feels with his life. In the midst of a depressive episode where Agustín decides to lock himself in a room, Claudia leaves for some time away and Agustín soon receives a visit from his estranged twin brother, Pedro (also played by Mortensen), a beekeeper who reveals he has terminal lung cancer. Certain circumstances lead to Agustín eventually escaping his obligation-filled existence and assuming his brother’s identity, taking up residence in Pedro’s rundown shack in Argentina’s Tigre Delta island region where the brothers grew up. A romance develops with one of Pedro’s much younger bee farm helpers (Rosa, played by Sofía Gala Castaglione), while Agustín becomes caught up in the fallout from Pedro’s past criminal affairs with some shady locals.

Mortensen is solid as the brothers, who only share a few scenes simultaneously. Sometimes it’s difficult telling them apart, although the Pedro character tends to be a little more rough around the edges and frankly, I couldn’t distinguish the subtle differences in the characters’ accents that Mortensen talked about during the post-screening Q&A. Regardless, his comfort level with the Spanish language is certainly never an issue. Villamil and Castaglione turn in quite fine supporting work, but Daniel Fanego as the proverbial villain is a definite weak link in the film. Other than looking rather creepy, I found the role underwritten and the actor lacking in screen presence.

Piterbarg and cinematographer Lucio Bonelli do a nice job of capturing the dank and swampy atmosphere of the isolated delta area, which not surprisingly is a magnet for criminals and outcasts and makes for a nice backdrop for the malfeasance that drives the narrative. The director also specifically lets a number of questions hang, adding to the film’s mystery, but occasionally there are some befuddling story choices. Most glaring is the ease with which Agustín passes himself off as Pedro, as well as the fact that he doesn’t bolt after being beaten by locals who mistake him for his brother just shortly after his arrival in the Tigre Delta.

Everybody Has a Plan‘s flaws, not the least of which is its overly languid pacing, result in a decidedly unremarkable viewing experience.

This entry was posted in Film Festivals, TIFF and tagged #tiff12, argentina. Bookmark the permalink.