The Pervert’s Guide to Ideology 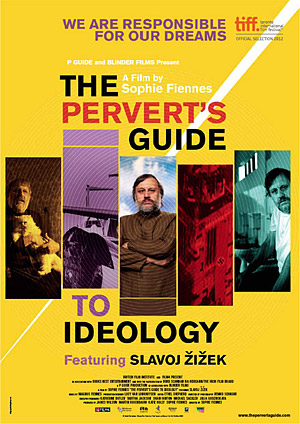 The Pervert’s Guide to Ideology (Director: Sophie Fiennes): It’s hard to believe it’s been six years since Sophie Fiennes put Slovenian philosopher and “cultural critic” Slavoj Zizek into a rowboat and filmed him in a facsimile of a scene from Hitchcock’s The Birds. The truth is that the visuals have stayed with me much longer than Zizek’s passionate but convoluted theories about cinema. But I’m back for more. Why? Because Fiennes’ brilliance in situating Zizek within the films he’s discussing make this the very best kind of film school, whether you agree with his conclusions or not.

This second installment finds Zizek extending his reach to the larger themes of ideology, challenging our ideas about democracy, consumerism, hedonism, and even the existence of God. Though some of his choices are provocative (using Scorsese’s The Last Tempation of Christ to argue that Christianity is a perfect religion for atheists, for instance), others seem obvious after the initial novelty has worn off. His use of Jaws to explain the rise of German anti-Semitism seemed like a very basic explanation of scapegoating, but it was fun to see him bobbing around on the boat like some kind of Balkan motormouth Robert Shaw.

As always with Zizek, too much of a good thing can be exhausting, and the film would work much better divided into one-hour episodes. In fact, the first film was organized this way (with Parts 1, 2, and 3). This time, director Sophie Fiennes seems to have had a harder time shaping the material, and the ending, in which Zizek declares his optimism for the future based on things like the Occupy movement, felt unearned and hastily added.

Nevertheless, it’s an entertaining ride, especially the after-the-credits scene in which Zizek re-enacts a pivotal scene from James Cameron’s Titanic.

After the screening, Zizek and Fiennes were interviewed (or at least it was meant to be an interview) by British journalist Danny Leigh. You can hear how that went here:

I couldn’t find a trailer for the new film yet, but enjoy this one for The Pervert’s Guide to Cinema: