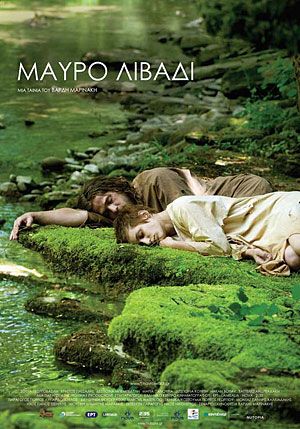 Black Field plays as part of Inside Out on Saturday May 28 at 7:15pm at the TIFF Bell Lightbox.

Black Field (Mavro livadi) (Director: Vardis Marinakis): Continuing the recent trend in Greek cinema of presenting identity and sexuality as monstrosities resulting from a sheltered and abject upbringing, Black Field – similar to Dogtooth (review) and Attenberg – confronts its audience with inaccessible characterizations and a stark depiction of distorted ideals manifested in human form upon youthful sexual awakening. The main distinction here is that while the other titles take place in modern times, clearly commenting on a declining Greek economy after years of instant gratification without foresight, Black Field jumps back to the 17th century to isolate its vacuum paradigm, which unfolds in a rural cloister.

The story is simple enough, following an injured and unnamed Jannisary (Hristos Passalis) through the countryside to a cloister where he collapses under the weight of injuries into the care of a group of nuns, but it plays out in a somewhat unconventional and unexpected manner, despite a very sombre and deliberate tone and pace. Anthi (Sofia Georgovassili), a younger, socially isolated nun, takes to treating his wounds, retreating to her room to play out dirty sexual fantasies about the virile warrior in her head.

We learn early on that Anthi has a penis, which we see as he cuts his inner thighs to sate his understandable internal pain. It’s an appropriate choice that detracts from the possibility of a Crying Game shock, which helps further the didactic intentions, asking the audience to assess nature versus nurture and the psychological nature of repressing and sheltering someone from a world they’re bound to eventually confront.

Shot with all encompassing static composition and long takes of the landscape in relation to character, this distorted coming-of-age also works as an aesthetic treat, convincingly depicting the 17th century with its dampened stone nunnery and seemingly untouched snippets of natural environment. It heightens that sense of social isolation necessary to detail the specificities of the relationship that develops between the Turkish soldier and the transgendered nun.

Even if deliberately cold, never offering any sort of close-up emotional catharsis or humanizing reactionary perspectives, this Greek import never suffers from a lack of provocation and intrigue, offering a variety of topics for discussion. Plus, Anthi lifts up her habit at one point, flashing the entire nunnery, which leads to a suicide. Even if the academic and dramatic aspects of the film don’t appeal, this sequence alone can at least inspire a few inappropriate chuckles.

This entry was posted in Film Festivals, Inside Out and tagged #insideout11, greece, transgender. Bookmark the permalink.