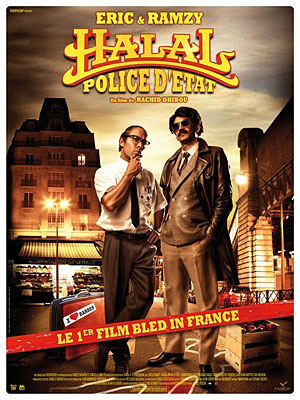 Halal police d’État (Halal Five-O) is screening as part of Cinefranco on Thursday March 31 at 9:00pm at TIFF Bell Lightbox.

Halal police d’État (Halal Five-O) (Director: Rachid Dhibou): French comedy duo Eric and Ramzy (Eric Judor and Ramzy Bedia) star in this utterly stupid but frequently funny farce about two Algerian cops solving a serial murder case in Paris. Looking like a North African Borat, Inspector Nerh-Nerh (Ramzy) is picked to represent the Algerian force when one of their diplomats is murdered in a corner grocery store. He takes along Kabyle (Eric), a former cop who claims to have been abducted by aliens, an incident which has left him without his Algerian accent. He also appears to be hiding an alien stowaway, but we’re never quite sure he just hasn’t lost his marbles.

The film plays upon every racial stereotype in the book for laughs, and it probably resonates with a lot of French North Africans when our two heroes are repeatedly busted by French cops, beginning as soon as they step off the plane from Algiers. When the case they’re working on turns out to be part of a string of killings at corner groceries all over Paris, the local cops think they’re dealing with the Chinese mafia. Only Nerh-Nerh, in true Inspector Clouseau fashion, determines that it’s really the work of a secret network of white supremacist Catholics. In the end, the conspiracy is revealed, with the help of a visitor from space, and everyone learns a valuable lesson.

This crowd-pleasing trifle borrows heavily from everything from the Pink Panther movies to Mel Brooks to the previously-mentioned Borat. And although the humour will likely have a sharper edge for the French audience for whom it was made, Halal police d’État kept me entertained right up to the utterly ludicrous final set piece.

This entry was posted in Cinéfranco, Film Festivals and tagged #cinefranco11, algeria, france. Bookmark the permalink.