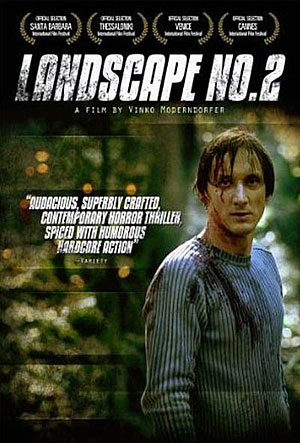 Landscape No. 2 (Pokrajina St. 2) (Director: Vinko Moderndorfer): It must be tempting for Balkan filmmakers to take any story, no matter how familiar, and submerge it in the region’s troubled history. Surely it will add depth and make the film seem more “important” in the eyes of international critics? In the case of Vinko Moderndorfer’s Slovenian heist thriller, the historical subplot feels clumsily bolted on and doesn’t really add much.

Sergej and Polde are burglars who specialize in stealing works of art from officials of the old Yugoslav Communist regime, which they hold for ransom. The elder Polde maintains that their crimes are justified since the Communists looted these artworks from the national gallery at the end of World War 2 and they really belong to the Slovenian people. During their latest heist, Sergej impulsively takes some cash and documents from a safe hidden behind their chosen painting and neglects to tell Polde. It turns out that these documents have enormous value to the elderly General whose house they’ve robbed. They implicate him in the postwar execution of collaborators and “traitors” and he’s desperate to get the documents back at any cost. He calls in “The Instructor,” a henchman with whom he’s worked before, to retrieve the documents at any cost. The Instructor, once unleashed, is a force very like Javier Bardem’s character in No Country for Old Men, continuing his grim mission even after the General dies of old age. For him, pursuing the trail means killing everyone from whom he can extract information. He’s not particularly efficient or careful as a killer, though, leaving messy crime scenes everywhere. He’s helped tremendously by the fact that the cops think that Sergej is behind the killings.

For his part, Sergej is ignorant of the importance of the documents. In fact, he’s ignorant about pretty much everything except chasing women. He shuttles between his frumpy but loyal fiancée Magda and the rich and glamorous Jasna, lying to both of them about the existence of the other. He’s a bit of a louse, and stupid, too. But his behaviour leads to terrible consequences for everyone around him, and finally for Sergej himself, who comes literally face-to-face with the crimes of the past.

As mentioned earlier, the historical aspect, though potentially interesting, is rather clumsily executed. The recent discovery of postwar mass grave sites seems to be on every television in the film, and Sergej’s gay friend Damjan (played as an outrageously offensive stereotype) just happens to be researching the subject. It’s never explained why the General would have held onto such incriminating documents in the first place. And the climactic scene conveniently plays out at the site of one of these mass graves.

Nevertheless, Landscape No. 2 is a well-made thriller, and even if it does borrow a little from other films, have an unsympathetic lead character, and trade in the worst stereotypes about gay people, it’s still compulsively watchable with some nice stylistic flourishes. Based on the age of “The Instructor,” I’m assuming that the director was also trying to make some connection between atrocities carried out after World War 2 and ones from the more recent Balkan wars, but it’s another dropped thread. If the historical section had been filled out more, maybe with some flashbacks and more of a real mystery, it could have been so much more than a mainstream thriller.

This entry was posted in Film Festivals and tagged #euff10, europeanfilmfestival, slovenia, worldwar2. Bookmark the permalink.