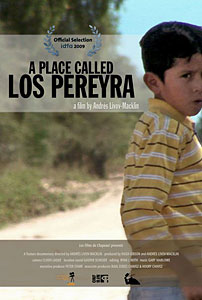 A Place Called Los Pereyra will have its Toronto premiere on Friday July 9 at the Royal Cinema at 7pm. Director Andrés Livov-Macklin will be in attendance for a Q&A. The film will also screen July 10-12 at 7pm.

A Place Called Los Pereyra (Director: Andrés Livov-Macklin): In the 19th century, several native societies in the south Pacific began to develop unusual religious practices after contact with the technologically-advanced people of Western societies. When the Westerners had provided them with advanced material goods and then departed, they would attempt to lure the Westerners back with rituals. Over time, they began to worship these white men and women as deities. Such was the gulf in understanding between the two cultures that they could only conceive of their visitors as supreme beings. These “cargo cults” persist in some parts of Polynesia even up to the present day.

It didn’t take long for the phrase “cargo cult” to pop into my head once I began to watch the behaviour of the remote villagers of Los Pereyras, Argentina. Located in “El Impenetrable,” a huge forested region nearly 1,500 kilometres from the capital of Buenos Aires, Los Pereyra lacks electricity and telephone lines, and so is essentially cut off from the rest of the country. That is, except for five days each year, when they are visited by “Las Madrinas” (“The Godmothers”), a charitable organization from Buenos Aires.

In Livov-Macklin’s verité-style portrait of the village, we learn next to nothing about these “god” mothers, or even about the villagers themselves. Instead, we join in their languid pace, eagerly awaiting the arrival of Las Madrinas. The focus of the film is the village school, which we learn is financially supported by the faraway charity. The children are put to work cleaning and painting before their benefactors’ arrival, and we even witness them composing songs and letters to welcome them. It’s all a little bit creepy.

It only gets creepier when the Godmothers finally arrive, nearly half an hour into the film. As it turns out, they are much younger than I imagined. In fact, it’s a group of high school girls and their teacher. While they’re suitably motherly with the younger children, they also flirt with the older boys of the village. Over the course of their short stay, they conduct public health clinics and spend time teaching and playing games with the schoolchildren. They also take them to a zoo, where I got the impression that the city girls were more interested than their rural charges. For them, the trip seemed just as much an exotic summer getaway as a charity mission.

And then, just as quickly as they arrive, they’re leaving. Being teenaged girls, they’re emotional, shedding more tears than the children. In the days that follow, life quickly returns to normal. The goods they’ve left behind, and the small scraps of hope for a better future, get used up pretty fast.

The film brings up many interesting questions about the value of charity. Does this type of work help the privileged girls more than the recipients of their largesse? Is it just an intense emotional high for sensitive adolescents or will it really change them? Will it have any lasting positive effect on the village? Because of its strictly observational perspective, it doesn’t attempt to answer any of these questions, but it certainly allows you to feel the sense of anticipation and then abandonment that the village children and their parents and teachers feel. It may even be a little bit unfair in that it doesn’t really give any time to the Godmothers or their leaders to explain their own motivations and goals for their involvement.

And although I love the fact that the film makes us wait nearly half an hour to meet the fabled Madrinas, overall, the languid pace may lose some viewers. For the patient, though, A Place Called Los Pereyra delivers an emotional punch that will leave you wondering whether most types of charity exist only to soothe the consciences of the privileged.

This entry was posted in Documentaries, Theatrical Release and tagged argentina, charity. Bookmark the permalink.