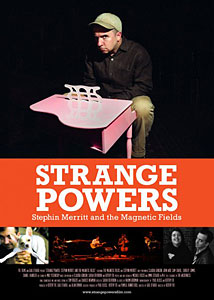 Strange Powers: Stephin Merritt and the Magnetic Fields (Directors: Kerthy Fix and Gail O’Hara): Very early in the film, a title card informs us that “To some, [The Magnetic Fields] are an iconic band. To most, they are completely unknown.” I’m not quite sure why the filmmakers feel the need to inform us of this banality, which is true of just about every band, but this film isn’t likely to change anything about that equation.

For the record, I happen to like The Magnetic Fields very much, and I think Stephin Merritt is a prodigiously gifted songwriter. However, my initial suspicion that he and the band wouldn’t make for a very interesting documentary turned out to be true. Despite some very nice performance footage, the film doesn’t really add anything to the band’s music. Merritt himself constantly seems slightly baffled why anyone would want to make a film about him. Intensely private and perceived as somewhat of a curmudgeon, he mumbles so often that the filmmakers are reduced to providing subtitles for much of his dialogue. His longtime collaborator Claudia Gonson is chattier and more candid and it is of some interest to hear her side of the band’s story, but even she admits that she and the other band members exist to perform Stephin’s songs. While we see a small part of their working relationship (where they bicker like an old married couple), most of the actual songwriting comes from Merritt’s long days or nights spent “with a drink and a cigarette” in one of the local gay bars.

The film was reportedly shot over ten years, but we never really know exactly where we are in that timeline. The band’s history goes back to the 80s, when Gonson and Merritt met, but their greatest success came with the 1999 release of the monumental 69 Love Songs project, which is when I became a fan. There is footage shot during the recording of their 2008 album Distortion but everyone seems to be aware that their moment of fame has passed. Not that that bothers Merritt in the slightest. He seems content to continue writing songs, although the film does chronicle his sudden decision to move to Los Angeles from New York to try to get work writing film soundtracks. The filmmakers seem to have missed the discussions and thinking that led to that decision, though, so a potentially interesting storyline is reduced to a title card.

The one moment of potential drama comes around the one-hour mark, when Merritt is accused by some music journalists and bloggers of being a racist. Their reasoning? That he doesn’t like hip-hop, that he admits to liking the song “Zip-a-Dee-Doo-Dah” from the racist Disney cartoon Song of the South, and that he didn’t have enough black music on his list of the top songs of the 20th century, published while he was writing for Time Out New York magazine. This ludicrous episode simply blows over, though, and like Merritt’s mumbly monotone, the film returns to its otherwise flat chronicling.

It’s hard to fault the filmmakers. They are obviously fans who want to share their enthusiasm for The Magnetic Fields’ music with others. But even with talking head endorsements of the band from Peter Gabriel, Sarah Silverman, Carrie Brownstein (from the band Sleater-Kinney), and author Lemony Snicket (Daniel Handler), the film will have a difficult time reaching anyone who’s not already a fan.