Eun-Soo is on his way to visit his sick mother and on the phone with his pregnant girlfriend when he swerves to avoid something in the road. When he wakes up, he is able to crawl from his wrecked car before passing out again. When he wakes again, it is nighttime and a young girl with a lantern is there to guide him to her house deep in the forest. Even before we arrive at the strange house, we know we’re in archetypal fairytale country. Eun-soo is a young man with some family issues. His girlfriend accuses him of not caring about the impending responsibilities of fatherhood, and he reveals a bit later that he and his mother are not particularly close. When the angelic girl introduces him to her siblings and parents, there is clearly something amiss. The adults seem fearful and defer constantly to the children, especially brother Man-Bok. The house seems like something out of an American sitcom from the 50s, filled with candy and toys and garish colours. Eun-Soo is convinced to spend the night, but when he sets out the next day to return to his car, he finds himself back at the house again. So begins a multi-day ordeal and one creepy story.

The film does a masterful job of creating an atmosphere of unease, combining cinematography, score and art direction to convincingly portray this strangely sinister child-centred world. It slowly becomes clear after the “parents” disappear that these kids have no real mother and father, and that they have been luring substitute parents here for many years and trying to convince them to stay. What happens to these luckless surrogates is only partially revealed, but Eun-Soo is soon desperate to return to the family he thought he didn’t need. 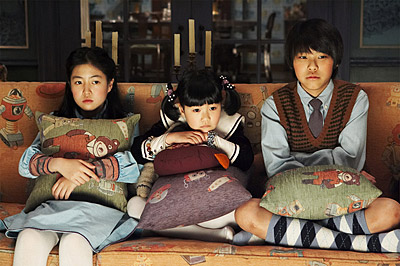 Strangely enough, these love-starved “children” end up teaching Eun-Soo a lot about fatherhood, especially when he has to protect them from a malevolent preacher. Like Eun-Soo, the plot does get a little tangled in the woods in the middle section, but the ending is surprisingly moving, and the performances of the three child actors are universally excellent.

Note: Hansel and Gretel is the second theatrical release of Evokative Films, whose founder Stéphanie Trépanier I interviewed recently.

Hansel and Gretel opens in Toronto on Friday March 27 for an exclusive run at the AMC Yonge-Dundas theatre.

This entry was posted in Theatrical Release and tagged children, horror, korea. Bookmark the permalink.