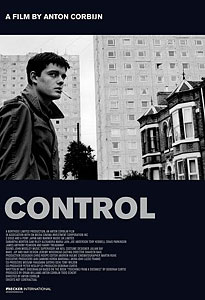 Control (Director: Anton Corbijn, UK/USA, 2007): My fears about this one were mostly justified. Anton Corbijn began his career as a rock photographer and is perhaps best known for shooting the covers of U2’s albums. From there he moved into directing music videos before taking on this film as his feature debut. Corbijn has crafted a pretty conventional biopic about the life of Joy Division’s singer Ian Curtis, who committed suicide by hanging himself on the eve of the group’s first US tour in 1980. All of the formative moments are checked off: Ian as glam-loving teenager singing in front of a mirror, Ian meeting and marrying his wife Debbie, upon whose memoir (Touching From a Distance) the film is based, Ian’s first epileptic seizure, Ian’s affair with Belgian groupie Annik Honoré (played by an impossibly gorgeous Alexandra Maria Lara). As with most biopics, time is compressed to a ridiculous extent, making it difficult to feel any depth in particular scenes before we’re rushed off to the next major event. As well, Corbijn films in black and white, and instead of making late 70s Macclesfield look like the grim industrial suburb it was, he almost makes it look pretty. In the same way, he photographs Curtis (played ably by young Sam Riley) like the rock photographer he can’t leave behind. Samantha Morton does a fine job of portraying the forgotten wife, but given that she was hardly acknowledged by the members of the band, it’s hard to trust much of the script, which must by nature deal in speculation.

However, the actors portraying the band members played all their own music, and did a wonderful job. And the film drove me back immediately to listen to my Joy Division records, which must mean something worked. I thought the scenes leading up to Curtis’ death were handled sensitively as well. But perhaps my favourite moment was one of the lightest. The presence of John Cooper Clarke (playing John Cooper Clarke!) performing his inimitable spoken word piece “Evidently Chickentown” made me long for the days when someone like Clarke could open for a band as “dark” as Joy Division.

Curtis’ story reminded me vividly of another reluctant rock star. Someone hungry for fame but then disdainful when it arrived. Someone who married and had a child only to doubt his abilities as a husband and father. Someone who struggled with health issues to the point of despair. Yes, I think if there is an afterlife, Ian Curtis and Kurt Cobain are sharing a cigarette somewhere.

NOTE: I saw this film before the film festival started at a special press screening. I’ve actually revised my numerical rating upward in the days since I first saw the film.

UPDATE: The film opens in Toronto, Montreal and Vancouver on October 23rd.