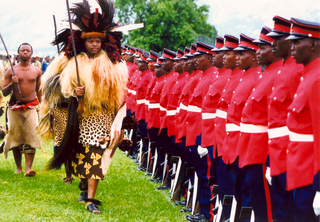 Without The King (Director: Michael Skolnik, USA, 2007): Swaziland has a population of just over a million people, and 42.6% of them are HIV positive, the highest infection rate in the world. In addition, more than half the population live on less than a dollar a day. Meanwhile, as the last functioning monarchy in Africa, the king and his many wives live in luxury oblivious to the suffering of their people.

Director Michael Skolnik, just 28 years of age, has known Swaziland’s King Mswati III since 1999. After taking a Zulu language class at UCLA and discovering that his teacher was an advisor to the king, he became interested in the Kingdom of Swaziland and its unique political situation. As the king got to know Michael’s work as a filmmaker better, he asked him to make a film about him. So this could very well have been called “About The King.”

Instead, when Skolnik spent time in the country, he discovered the grinding poverty, the soaring HIV rate, and the people’s simmering anger. Mswati’s father, King Sobhuza II, banned all political parties back in the 1970s, and the king appoints the prime minister, the cabinet, and a third of the members of the largely ineffectual parliament. Despite claiming to make his decisions based on consultation with “the people” and their representatives, King Mswati doesn’t really seem to know what’s going on outside his lavish palace. He acknowledges that when he goes out on ceremonial visits, he knows that officials clean things up and hide the reality from him. And yet, he seems to do nothing. In the interviews Skolnik conducted with him for the film, the king, not yet 40, seems affable but without much substance.

In contrast, his eldest daughter, Princess Sikhanyiso, introduces herself onscreen by performing a rap. At the age of 18, she is about to leave Swaziland to attend college in California, and at the beginning of the film, she seems spoiled and self-centred.

We also are introduced to several local political activists who speak candidly and at great risk about their frustration with the lack of democracy. A new constitution is approved but without any input from the people, and political parties are still banned. The situation seems to be escalating, and politicians’ offices are being bombed.

Meanwhile, with time away from her sheltered lifestyle, the princess begins to see some of the real problems facing her country. She repeats what many others do in the film, that the Swazi people don’t want to get rid of the monarchy, that it’s part of their culture. The film’s title comes from something she says: “Without the king, we have no culture.” However, at least for now, with the king they have no justice.

By the end of the film, she’s begun to grow up a little, and with her sister accompanies the film crew to one of the many AIDS orphanages in the country. She seems genuinely moved, and vows to make some needed changes. One wants to believe her.

The truth is that between AIDS, poverty, and a brewing rebellion, Swaziland could extinct itself within a generation. This film might actually make a difference. Not by shaming western audiences into more donations, though I’m sure that wouldn’t hurt, but because of the director’s intimate access to the royal family. When they see this film, they won’t be able to ignore the urgent needs of their country, willfully or otherwise.

For that reason, it doesn’t really matter what I think of the film. For the record, I’d say that it was a well-made but not necessarily innovative film. The use of mournful music over the scenes of poverty bothered me a little. But just because of the potential of the film to make a difference to an entire country, I’m grading it a little higher. Let’s hope the king agrees with me.

Here is the Q&A with director Michael Skolnik from after the screening:

UPDATE: The film was awarded the Special Jury Prize International Feature Documentary at the Hot Docs Awards ceremony held on April 27. Congratulations to director Michael Skolnik and everyone involved in the film.

8 Responses to Without The King