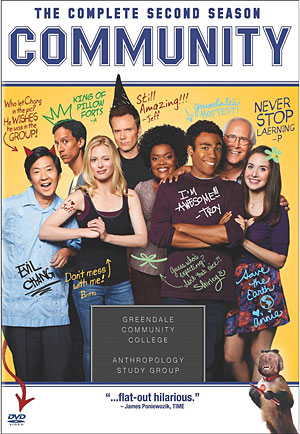 Editor’s Note: Community: The Complete Second Season was released on DVD in the US and Canada on September 6 by Sony Pictures Television. You can help Toronto Screen Shots by buying from Amazon.ca or Amazon.com.

A few months ago, after much nagging by friends, I began watching Community on Netflix Canada. Since I have just finished the first season, I was glad to know that the second season of this uncommonly smart sitcom was coming to DVD just in time. The title is a reference to “community college,” that second-class citizen of higher education. In the first season, we were introduced to a ragtag group of characters who meet at a Spanish study session and who quickly learn to put the “community” into community college.

The hook in the first season is that we’re following Jeff Winger (Joel McHale), a former lawyer who has been disbarred after it’s discovered that he faked his degree. He’s come to Greendale Community College in order to take the fastest (and easiest, he thinks) route back to a well-paying legal career. But we quickly learn that it’s the other characters who are much more interesting. This is truly an ensemble cast, and there are no weak links at all. But for that reason, the show does take a few episodes to really start firing on all cylinders, as the audience comes to know each character’s quirks. I’ve not yet watched the second season, but have been told that it’s better than the first, and that would be no surprise. With so many strong characters, there are nearly endless possibilities for funny storylines.

All I know is that I’m very much looking forward to sitting down with Jeff, Britta, Pierce, Abed, Troy, Annie, Shirley and Señor Chang as soon as possible. In fact, if I can watch all of these today, I’ll be all caught up for the third season, which premieres tomorrow night on NBC.

Episode guide for the entire series from Wikipedia

This entry was posted in DVD, Television and tagged college, sitcom. Bookmark the permalink.