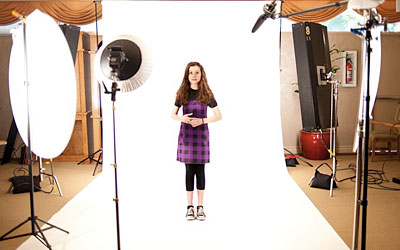 The Hollywood Complex (Directors: Dylan Nelson and Dan Sturman): The Hollywood Complex looks at the trials and tribulations of aspiring child actors and their families who make their way to Hollywood every spring for television’s “pilot season,” when most networks and cable channels do casting for their shows. The film follows the stories of a handful of kids and their parents, who all temporarily reside at the Oakwood apartment complex in North Hollywood. The Oakwood specializes in housing young talent, providing a like-minded environment for its clientele and direct access to a network of acting coaches, workshops, casting agents, and photographers, all of whom sell hope, along with their specific services.

The bulk of the documentary, which was finished just four days prior to its world premiere at Hot Docs, chronicles each child’s struggle to stand out in a crowd of thousands. Shanna, 13, is just in from Colorado and a complete newbie to Hollywood, accompanied by her skeptical yet supportive mother. Cruelly, before Shanna has even gotten into the game she’s at a disadvantage, as we find out that the odds of landing a role for young teenagers or someone in their late tweens decreases significantly because of the abundance of kids in this age group who are competing for the jobs available. It’s an oddball spin on the “actresses over the age of 40 have a hard time finding work” axiom. The Casa family has five kids making the audition rounds, which makes for cramped enough accommodations at the Oakwood that one of them has to sleep under a table. Mama Casa says that she’s pretty open to having one of her sons take on any role, as long as it’s nothing that glorifies Satan. Then there’s the annoyingly precocious Megan, who exudes confidence and thinks it’s a good strategy to show up at one audition dressed in a garish, age-inappropriate outfit that is sure to make an impression. It doesn’t. Megan’s mom, also extroverted and quirky, tiredly admits that they’ve had somewhere in the neighbourhood of 40+ straight auditions with no callbacks. Perhaps in an effort to change her luck, Megan ends up changing her stage name to “Presley Cash.”

Additional by-products of the film’s focus are examinations of celebrity culture, the ugly side of show business, and the lengths that mothers and fathers will go to for their children. I expected to see some examples of the proverbial “stage moms,” or parents who were just attempting to live vicariously through their kids, but there was really no evidence of this in the film (at the post-screening Q&A session the directors said they were surprised at how little of it they encountered). The fact that none of the families we see appear to come from an affluent background only adds extra emphasis to their struggles and the gamble they’re taking. In one scene, we see a mother rummaging through a recycling bin with one of her kids in an effort to scrounge up bottles that will give her a little extra cash. The well-known sleazy side of show business rears its ugly head frequently, with the two best examples being one scene where a young child going up for a role as a dying patient on House is encouraged to watch YouTube videos of real kids who are dying, as well as another scene where a casting agent deciding on a young girl for a role says that he needs one with “no titties.” That line elicited a mass groan from the theatre audience.

Directed by Dylan Nelson and Dan Sturman (Sturman brought his excellent Soundtrack for a Revolution to Hot Docs’ Doc Soup series last year), the film is a revealing and somewhat disturbing look into a segment of show business where children are commonly objectified for our entertainment and treated as a commodity, and are willing participants (along with their parents) while doing so. The Hollywood Complex should be imperative viewing for any kids and their parents seeking fame and fortune.