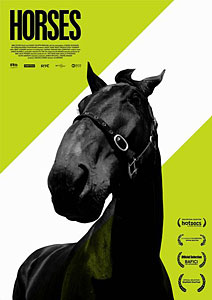 Horses (Director: Liz Mermin): This film chronicles a year in the lives of three Irish racehorses, and although we hear plenty from the human trainers, it’s an attempt to make the horses themselves the protagonists. In that respect, it’s only partially successful.

Mermin spent a year with Paul Nolan and his brother James at their Toberona Stables, training her camera on three of their best hopes for success. Diminutive but brave Ardalan has a few wins under his belt, but is having trouble moving up to races where he must jump high fences. Joncol is a gentleman giant, untested but perhaps the stable’s best prospect. And veteran Cuan na Grai is still recovering from a tendon injury. Though he’s had success, this season will determine whether he returns to winning or is forced into early retirement. The horses clearly have their own personalities. While Ardalan seems to only perform when it suits him, Joncol is a determined racer, and Cuan na Grai is described by his handlers as a “head case,” eccentric and skittish around strangers.

The real characters, though, are the men who work with the horses. Paul is both charming and blunt. He spends every waking moment trying to get the best out of these equine athletes. He makes it clear that while it is a business for him, he cherishes each of these animals. He speaks fondly of recently-retired champion Accordion Etoile, now free to run around at will in the paddock with the family’s pet pony. Groom Gerry is even more of a softie around the horses, constantly making small talk with them. It was fascinating to watch them work, and to realize how much they know about each of their animals and the conditions for any given race day.

I was surprised to learn that each of these horses might race only 4-5 times in a year, and that an injury can take them out of commission for a year or more. I was also surprised that at 5 years of age, Ardalan and Joncol were just embarking on their racing careers. That means that each horse is a significant investment and the owners and trainers only have a few opportunities to make back their money and hopefully a bit more. This human drama in addition to the pent-up anticipation of the horses themselves made each race shown in the film a nail-biter. We’re rooting for Toberona Stables as much as we’re rooting for each horse. If there was any doubt in my mind before, the film clearly shows how much these horses love to run and even more how they love to win.

Mermin takes a few risks in an effort to get inside the horse’s minds. Her innovative use of sound and music to indicate each horse’s mental state may be lost on a few audience members. The same goes for her use of flashbacks and a dream sequence. In spite of these effects, the rough nature of some of the camera work as well as a few too many close-up shots of the horses’ faces detract slightly from the film’s effort to capture the equine viewpoint. Nevertheless, Horses gives us an emotionally-involving glimpse into the lives of a few equine athletes and of the people who care for them.

Here is the Q&A with director Liz Mermin from after the screening, conducted by Hot Docs programmer Angie Driscoll: